Altior tightens grip on Arkle with another classy performance 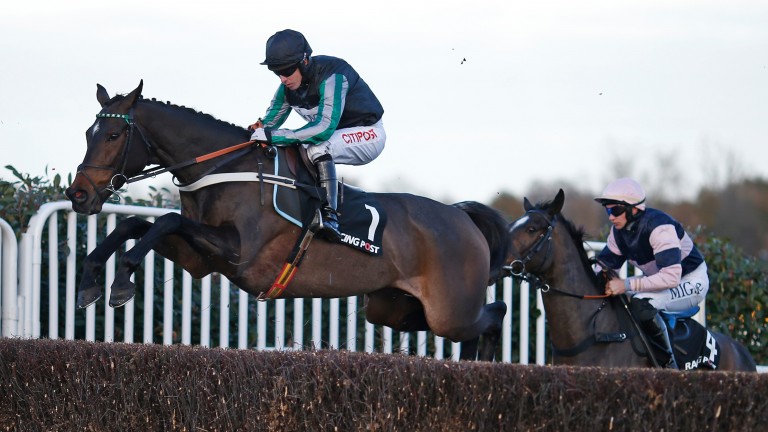 Altior gives an early fence plenty of height on the way to victory in the Henry VIII Novices' Chase at Sandown
Alan Crowhurst
1 of 1
By Graham Dench 4:34PM, DEC 3 2016

The novice chaser who Nicky Henderson says has everything was not foot-perfect on his second run over fences, but his class shone through brightly at the end of the Racing Post Henry VIII Chase and he coasted home six lengths clear of Charbel.

Altior might not quite be the natural successor to brilliant two-miler Sprinter Sacre, whose recent retirement has left such a void at Seven Barrows, but it is a case of so far so good, and there is much, much more to come. His grip on the Racing Post Arkle Chase is even tighter now, and only Ladbrokes left him unchanged at 2-1.

Henderson, who sums up Altior's principal gifts as "talent, class and lots of gears" said: "We've got a bit to learn, but he's got so much scope, and that's why we are chasing and not hurdling. He's got the physique to do it and he was very good.

"There was one massive great yahoo launch, and that's the kind of thing we have to iron out of the vocabulary as we go along, but the rest of it was great."

He added: "This was almost like his first chase, and it's tricky here. It tested him, but he thought about it and he worked it out. We knew we'd get a right good lead off a right good pace, although I thought it might have been more furious, and he's got serious gears.

Noel Fehily, who first sat on last season's Supreme Novices' winner only on Friday in Nicky Henderson's indoor school, was suitably impressed and inclined to forgive the mistakes.

He said: "The mistakes he made early were only novicey mistakes, and because he has so much ability he finds it easy. He can stand off, because he knows he can do it.

"He's without a doubt one of the better horses I've ridden. He has a bit to prove yet, but he's very good and he's definitely going the right way.

"More racing will do him good, but one of the mistakes he made was as much my fault as his, as I'd let him go to sleep a bit too much. When I grabbed hold of him down the back he jumped fantastic."

Kim Bailey was impressed by the winner and is no hurry for Charbel to take him on again. He said: "He's run a blinder but not won. The winner is a very good horse, it's as simple as that. We won't meet him for a while, that's for certain."

FIRST PUBLISHED 2:15PM, DEC 3 2016
You could still treat him as a Champion Hurdle horse because he's got those gears. He's got the scope, he's got the brain and he's got the feet. He's got everything there to nurture