Arc dream over for Kitasan Black after disappointing defeat 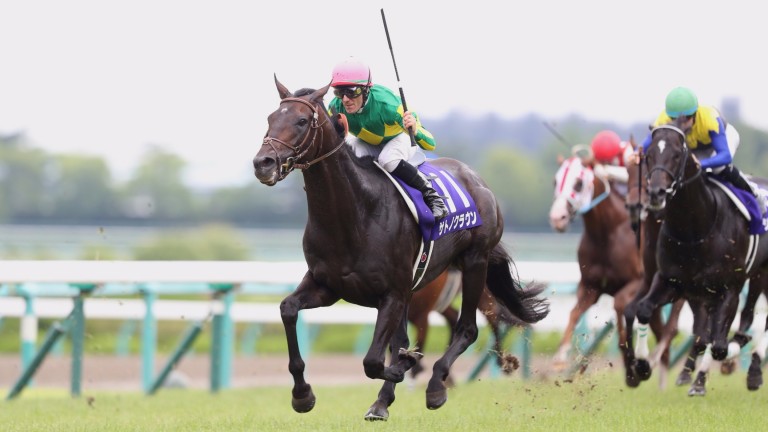 Japan's hopes of ending its Prix de l'Arc de Triomphe hoodoo suffered a blow after Kitasan Black – who was as short as 10-1 for Europe's richest race – folded tamely behind Satono Crown and was ruled out of the Qatar-sponsored showpiece.

Expectations were high in Kitasan Black's camp – "he really has matured into an incredible horse" said trainer Hisashi Shimizu before the 289,300,000 yen (£2m/€2.3m) race, which draws part of its field via votes from fans – but Japan's reigning horse of the year failed to fire.

Kitasan Black, sent off odds-on to capture his third straight Grade 1, raced handily under Yutaka Take but had a wide trip and was being niggled along by his legendary rider.

The five-year-old son of Black Tide, a close third in the Takarazuka Kinen 12 months ago, made his move swinging for home, although he had no answer to Satono Crown's lethal turn of foot under Mirco Demuro and faded into ninth, with 2015 Arima Kinen ace Gold Actor second.

Take, who came in for some criticism on social media for his ride, said: "He didn't run well, I can't say why. This is the first time he's been beaten like this. The ground wasn't bad, so it wasn't a problem for him and his condition was very good.

"There was no excuse for him, but I think it's very difficult for horses to win every race they run in."

Kitasan Black's trainer Hisashi Shimizu has now abandoned an Arc attempt and will aim his Japan Cup winner at the Tenno Sho (Autumn) at Tokyo on October 29 before a crack at the Arima Kinen on December 24 at Nakayama, which will be his "main target this year".

Satono Crown is no back number by any means and defeated Highland Reel in the Hong Kong Vase last year.

He is not in the Arc, but his victory earned him a place in the Breeders' Cup Turf on November 4 as the Takarazuka Kinen is a 'win and you're in' race for that.

A trip to Del Mar may be on the cards – if the travel is deemed not too much for the "nervous" talent – as business magnate owner Hajime Satomi already has 14-1 shot Satono Diamond for the Arc.

Satono Crown's trainer Noriyuki Hori said: "I couldn't get him in good condition for his previous race in the Osaka Hai [well beaten by Kitasan Black], so I'm very happy to get this result today.

"He is very nervous when he goes to the races, so I try to make countermeasures for it. He is not the perfect horse in strange environments, but he was good today."

It is the second year running the Takarazuka Kinen has wrecked an Arc dream after Duramente, who had been a 12-1 shot for Chantilly, suffered a career-ending injury when second in 2016

2012 More heartbreak as the brilliant but wayward Hall of Famer Orfevre shoots clear to the joy of millions of Japanese fans, but idles and hands victory to Solemia

FIRST PUBLISHED 2:38PM, JUN 25 2017
There was no excuse for him, but I think it's very difficult for horses to win every race they run in