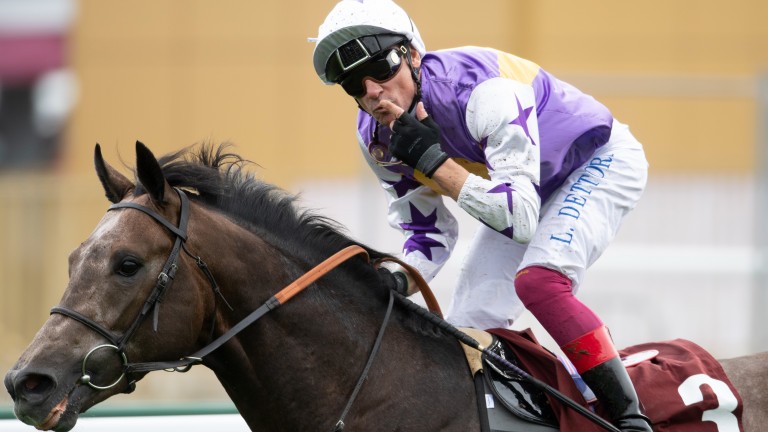 Hong Kong owner Marc Chan was not going to let the small matter of Covid and 6,000 miles distance stop him enjoying the celebrations as Angel Bleu ran down Noble Truth to land his first Group 1 under a fine ride from Frankie Dettori.

Chan joined trainer Ralph Beckett in the winner's circle via FaceTime as he spoke to reporters, holding out the chance that Angel Bleu might back up in Saturday's Dewhurst Stakes at Newmarket.

That would be a positive holiday for the son of Dark Angel, given he won the Vintage Stakes in July three days after running at Ascot.

"We came here for the soft ground and I think the bend helped," said Beckett, who was welcoming back his first Group 1 winner in France. "He had to be tough to go and get the other one, and he is that.

"I doubt we'd get much soft ground at Del Mar, maybe at the beach. If he comes out of this well and it's soft at Newmarket, then he's still in the Dewhurst. He's done it [backed up] before."

Dettori had to pick himself up after learning on Saturday evening that Love would not extend his proud record of participation in the Arc, though the sound of rain drumming against the window will have been music to his ears.

"Both of Ralph's horses that I ride for Marc Chan [Angel Bleu and Kinross] love soft ground," said Dettori. "I was a bit sad that Love is not well but I know that these two loved the soft and when the draw came out, I thought it was a big plus because he's got a tendency to go right.

"We're on the fresh strip and it's the perfect strip to have, especially with the false rail. He was a little bit timid early on among horses but halfway up the straight, I knew I'd pick up and get to the line. It never usually happens like this, but it was quite straightforward."

'We nearly pulled it off'

Charlie Appleby was delighted with the way Noble Truth dictated matters from the front and said a return trip to France was under consideration.

"We've tried to hold on to him in the past and he's a keen horse to do that," said Appleby. "We worked him this week and just let him roll on the front end of a gallop and they didn't get to him. We nearly pulled it off today.

"I thought we might go to Saint-Cloud for the Criterium because we know he handles conditions."

Favourite Ancient Rome finished best of the rest in third and looks sure to improve for a return to a mile, but there was no joy for Ebro River, who never got to the lead and only beat one home.

Jockey James Doyle said: "It was very disappointing – he just didn't seem to handle the ground. We thought he'd be okay. He's fine with a bit of ease but it's just too bad for him out there. It sapped his stamina as well. It's heavy, proper heavy ground."

Opera: 'The Breeders' Cup could be next' – Rougir denies Dettori in thriller

Abbaye: A Case Of You pounces late to give Ado McGuinness a first Group 1 victory

Foret: Charlie Appleby on the board as impressive Space Blues powers home

FIRST PUBLISHED 5:00PM, OCT 3 2021
We came here for the soft ground and I think the bend helped