'I'd think this is the most pressure Frankie's been under' - Cochrane 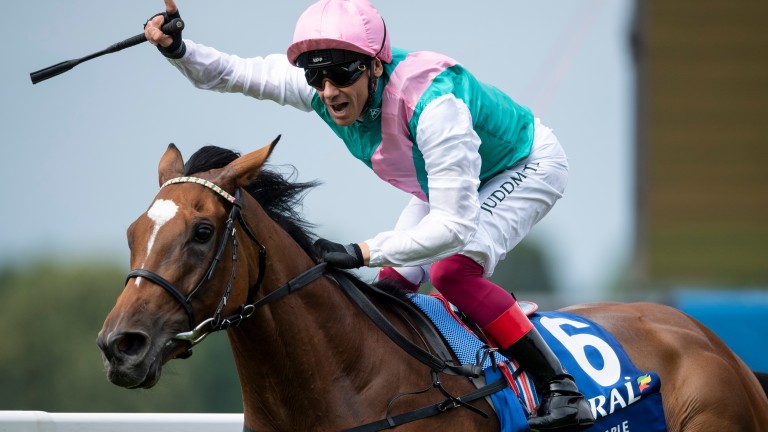 Frankie Dettori: preparing to partner Enable as she bids for a third Arc
Edward Whitaker
1 of 1
By Jonathan Harding UPDATED 8:51PM, OCT 3 2019

Frankie Dettori is taking no chances and will not ride until Saturday as he prepares to partner Enable in a bid to win an unprecedented third Prix de l'Arc de Triomphe on Sunday, according to his agent Ray Cochrane.

The 48-year-old missed the ride on Treve in 2013 after injuring his ankle at Nottingham four days before her Longchamp victory and the jockey is keen to avoid a repeat accident.

Cochrane said: "I'd think this is the most pressure he's been under going into a race because of how remarkable it would be to win it three times. He wants it to go right and the thought of winning will drive him up the hill. We just want a clear run and good luck.

"He's specifically not ridden all week, not because he doesn't want to ride, but because we don't want to risk something silly happening like it did in 2013, when he had a few good rides at Nottingham, the horse slipped going to the gates and he damaged his ankle.

"He'll be training every day for an hour or so to keep himself organised, as well as getting plenty of sleep and rest. He'll then have three rides on Saturday and five on Sunday." 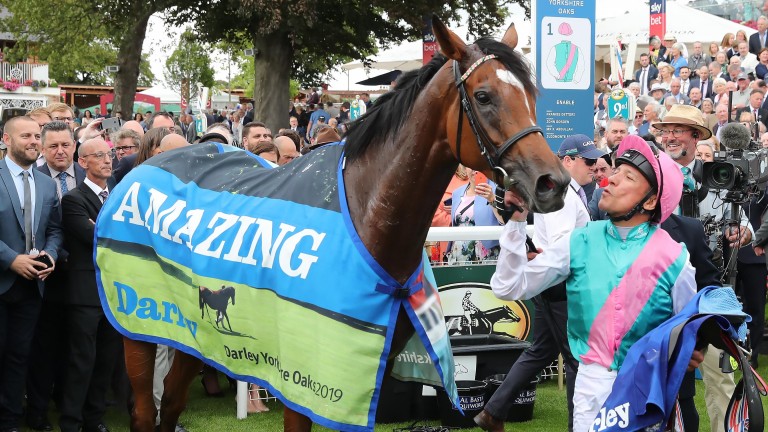 It must be love: Frankie Dettori plants a kiss on Enable after the Yorkshire Oaks
GROSSICK RACING

Dettori has won 248 times at the highest level with 16 of those victories coming since May, and his agent believes he is riding better than ever.

"Even if he doesn't ride another winner, he's had a fantastic year," said Cochrane. "He's in a better place than he's ever been, even when he was young. He's full of confidence and knows what he can do during a race and can plan around other jockeys.

"There's always a pressure for a jockey not to make a pig's ear of it, especially going into an Arc. The first thing that can beat a jockey is themselves. If you let the pressure build up, the race can be gone before the start, sometimes even before getting to the paddock."

Enable arrives in Longchamp after 12 straight victories, most recently when winning the Yorkshire Oaks for a second time in August, and much has been made of the importance of tactics in a race where she will break from stall nine.

"If anything is going to beat her it will be just a bit of bad luck. The other runners will need to bring their A-game. They can all get beat, but I can't see it happening on Sunday.

"Frankie will have seen the draw and by Friday morning he'll be able to tell me exactly how he's going to ride the race, exactly where the others are going to go and what he'll do.

"When he won on Golden Horn in 2015 I was cursing and swearing as he had an outside draw in stall 14. I spoke to Frankie the following day and he told me not to worry about it.

"He said he was sometimes slowly away and if he missed half a beat it didn't matter as much as he could saunter along on the outside. He told me how he was going to ride and rode it to the letter."

Dettori has won the Arc six times and partnered many of the sport's biggest names, but Enable resonates with the jockey, a bond epitomised by his emotional interview after winning the Yorkshire Oaks.

"He's ridden her for two years and she's a fantastic mare," said Cochrane. "You always get a special attachment to good horses."

The topic of Dettori's retirement comes up regularly, but his agent cannot see why the jockey would hang his boots up any time soon.

He added: "He's keeping his weight well, has a great trainer to ride for with great owners. When you're retired, you're retired for a long time. What else is he going to do?"

FIRST PUBLISHED 6:46PM, OCT 3 2019
Frankie will have seen the draw and by Friday morning he'll be able to tell me exactly how he's going to ride the race