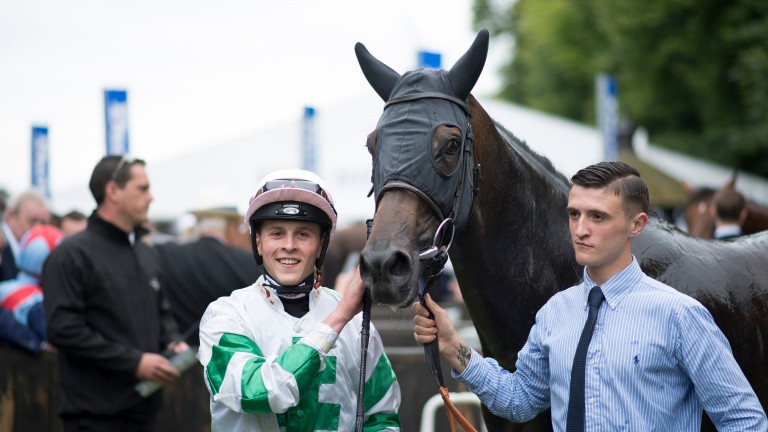 Clifford Lee after his biggest career win on Above The Rest
Edward Whitaker
1 of 1
By Mark Scully 7:13PM, JUL 15 2017

Clifford Lee bagged his 50th winner and by far his biggest yet as Above The Rest lived up to his name and won the bet365 Bunbury Cup.

The 5lb claimer, whose allowance will now drop to 3lb, was all smiles after Above The Rest wore down Godolphin's Steady Pace inside the final furlong and held off the similarly late challenge of Sir Dancealot to land the £120,000 prize at odds of 12-1

With so much racing taking place, neither winning trainer David Barron nor owner Laurence O'Kane opted to make the trip to Newmarket, but jockey and horse were all that was needed for the team to claim a notable success.

"He jumped well but got a little bit outpaced early doors so I had to squeeze him back on it," said Lee, who was riding the horse for the first time.

"I didn’t want to get there too soon but I had to make a move when I did and he found plenty when I asked him to pick up.

"He's done it really well in the end and it's great to get a big race like this under the belt, it’s easily my biggest win so far."

Lee continued: "It's great to get opportunities like this. I've got a good team, Niall Hannity is my agent, and Karl Burke, my boss, has been really good to me."

Almost equally pleased was the trainer of the runner-up, David Elsworth, as Sir Dancealot took a step in the right direction following a run of disappointing results.

"He's run a great race considering he was drawn 20," said Elsworth. "He had to drop in and come round a few but it's nice that he's back in form. There are no plans yet."

Steady Pace, under Josephine Gordon, made almost all of the running but ultimately had nothing left to deny the late-closing Above The Rest and Sir Dancealot, and trainer Saeed bin Suroor could now look to find a race at Goodwood for the four-year-old.

Bin Suroor said: "He ran well. He was in front a long time, but that's him, he likes to be somewhere close.

"He was simply beaten by a better horse today. We will look for six- or seven-furlong races for him."

FIRST PUBLISHED 3:32PM, JUL 15 2017
He's done it really well in the end and it's great to get a big race like this under the belt, it’s easily my biggest win so far