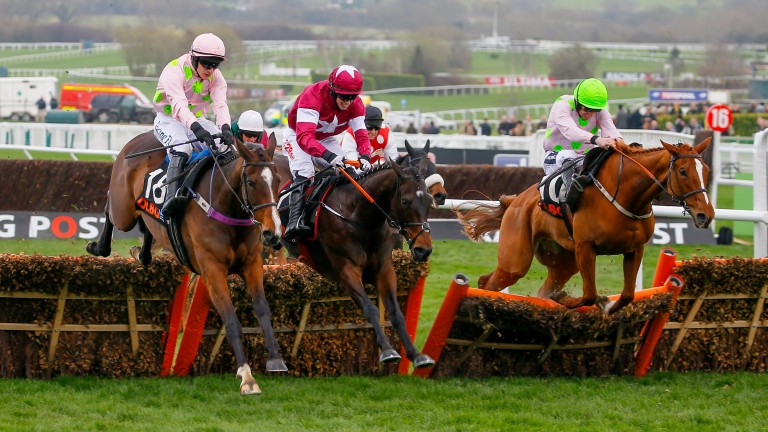 The game looked up for Apple's Jade as Vroum Vroum Mag and Limini attempted to execute their pincer movement in the OLBG Mares' Hurdle, but Bryan Cooper eked enough out of his game partner to rally for a thrilling victory over last year's winner.

It was a great escape that brought to mind that extraordinary Planet Earth scene in which the wily iguana somehow evades the clutches of an army of voracious racer snakes.

Cooper had given Apple's Jade her head going out on the final circuit and dictated the fractions from there. However, the Willie Mullins duo seemingly had a number on Apple's Jade's back as they turned in. When Vroum Vroum Mag led over the last, third might have been the best many would have expected of Apple's Jade.

She would ultimately prove even more elusive than that dogged iguana, causing in-running carnage that even David Attenborough might struggle to do justice to as she wriggled her way free of the Closutton duo en route to a brave triumph that crystallised the subplot that has coloured the entire season.

Having been one of the 60 Gigginstown horses that Michael O'Leary removed from Mullins in the autumn, there was a sting about this particular defeat for the man whose bid to retain the festival's trainers' crown for a fifth successive year has got off to a standing start.

Incredibly, this was the first time since 2008 that Mullins has drawn an opening-day blank, and, with the man who is also threatening to end his stranglehold on the domestic title having earlier foiled him in the Supreme Novices', there is little doubt that Apple's Jade's trainer Gordon Elliott is an itch Mullins is struggling to scratch right now.

Moreover, this was the tenth time the mares' race has been run; Mullins had won the previous eight, so he is being hit where he might be expected to be strongest.

"She was tough," Elliott said of Apple's Jade. "We knew the ground was going to suit her; that was a big help. Today was her Gold Cup. I put a tonguestrap on her for the first time and thankfully it worked out."

Apple's Jade, who will likely head for Punchestown next, was winning for a fourth time at the highest level.

It took a brave performance to see off two other high-class mares in what was an absorbing spectacle.

"They are three stunning mares," O'Leary said of the trio. "You couldn't fault any of them, and Apple's Jade was a good winner."

Mullins, as has been his style throughout the season, magnanimously congratulated O'Leary and his brother Eddie.

"My two ran crackers," he said subsequently. "It's a horserace and it was a good one at that. I thought my two ran their races and jumped very well - there were no excuses."

Having already suffered a collapsed lung and liver laceration, a broken arm and a cracked pelvis during a harrowing run this season, Cooper was also relieved to have got off the mark for the week early.

"I've been lucky to have a few winners since I came back last month and this is a bonus," he said.

"I thought I'd outstay Vroum Vroum Mag, but I was waiting for Ruby to come and pounce [on Limini]. I knew he'd have more speed, but we outstayed them in the end. She is as tough as nails."