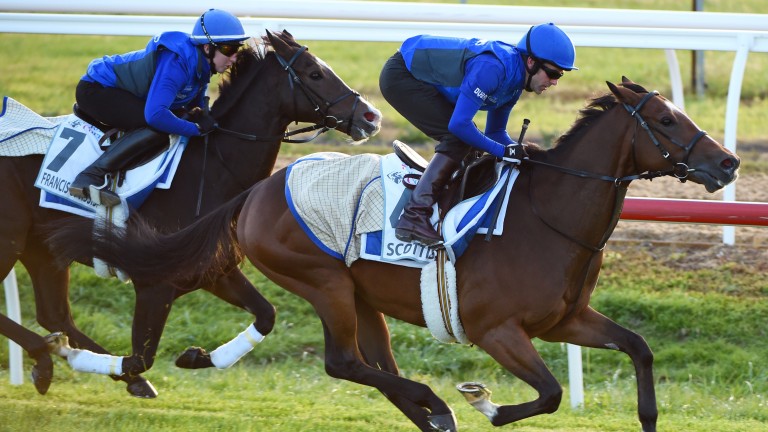 Francis Of Assisi (left) working with Scottish at Werribee earlier this month
Vince Caligiuri
1 of 1
By Mark Scully in Melbourne 1:27PM, OCT 26 2016

Another week, another piece of Spring Carnival glory for Charlie Appleby and Kerrin McEvoy as Francis Of Assisi proved in a different league to his rivals.

Seven days after Qewy ground out victory in the Geelong Cup, Francis Of Assisi made things look far more straightforward as he capitalised on what was a moderate tempo to snatch the unusual distinction of having claimed stakes wins for both Coolmore and Godolphin.

The six-year-old powered clear as the runners entered the long home straight, eventually scoring by a three-length margin that flattered the rest of the field.

"He's travelled down here nicely and the English team are having a great run of things," said McEvoy, himself in fine form. "I said to James [Ferguson] they should bring a team of 20 next year and come in about July time.

"The horse got in a nice rhythm and stepped it up from the three-pole. I was expecting [favourite Our Century] to be coming but I just had too much of a break. I was quite surprised, when I saw the big screen, how far I was in front."

Francis Of Assisi is the first overseas horse ever to have contested the Bendigo Cup.

'Let's hope we can win the Melbourne Cup'

The on-course commentator said of James Ferguson after the win that "the kid looking after them certainly knows what he is doing" and it is hard to argue, with Second Wave the only one of Appleby's five runners to have failed to hit the frame so far.

The 27-year-old Ferguson, who is overseeing the preparation of the Appleby string, admitted he is loving life in Australia and is praying the Godolphin team's luck can continue into next Tuesday's Melbourne Cup.

"The race worked out very well," he said. "We quite like these cups at the moment, so let's hope we win the Melbourne Cup on Tuesday!

"He was given another really good ride by Kerrin and it was nice to see him take it up from halfway and do the job from there."

While Francis Of Assisi will not contest the Melbourne Cup, with a handful of further options under consideration, Qewy is now all but guaranteed a start with Howard Be Thy Name, safely inside the 24-runner limit, failing to fire in Wednesday's race and extinguishing his hopes.

Asked to compare Francis Of Assisi and Qewy, Ferguson said: "He and Qewy are different horses. Qewy goes out there and stays but this guy has got a bit of a turn of foot on him. To put them up against each other, I wouldn't want to answer the question."

FIRST PUBLISHED 9:21AM, OCT 26 2016
We quite like these cups at the moment, so let's hope we win the Melbourne Cup on Tuesday