An exclusive glimpse at the action on Godolphin's private gallops 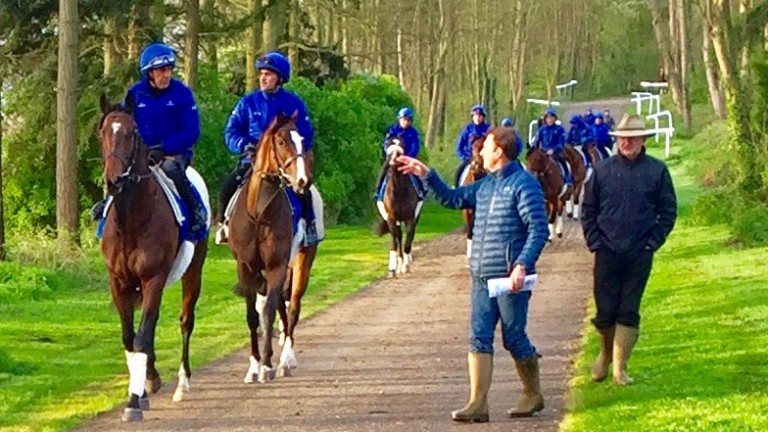 Charlie Appleby gives instructions to Willie Ryan aboard Blue Point, with John Ferguson to the right
1 of 1
2:59PM, APR 15 2017

The Racing Post's Newmarket correspondent David Milnes was granted rare access to Charlie Appleby's private Godolphin training operation at Moulton Paddocks in Newmarket on Saturday, where many of the stable's runners for next week's Craven meeting were out and about.

Appleby trains around 160 bluebloods for Sheikh Mohammed at the 1,200-acre facility, and jockeys William Buick and Martin Lane were on hand to put some of the most promising stock through their paces on a private uphill six-furlong grass gallop. Lane called in before undertaking a six-hour journey by car to ride at Musselburgh.

Along with the rest of Newmarket, hope abounds at this time of year at Moulton Paddocks, with no bubbles yet burst on the track and the Classic trials taking place on the Rowley Mile and at Newbury next week.

Although the yard is still coming to terms with the injury to their number one Classic hope Wuheida, there is plenty to look forward to in the longer term, not least Dubawi two-year-old Glorious Journey, who was the joint top lot at last year's Tattersalls October Sales at 2.6 million guineas.

Here is the pick of the equine talent on display on Saturday, with their riders.

Blue Point
Willie Ryan
Both Ryan and last year's Gimcrack winner are not long back from wintering in Dubai, but they look to have shaken off any jet lag judging by the way they swept past Salsabeel (William Buick) and decent four-year-old Cymric over six furlongs. The son of Shamardal is set to reappear in the Group 3 Pavilion Stakes at Ascot on May 3. Salsabeel is pencilled in for a 7f conditions stakes at Newmarket on Tuesday.

Hawkbill
Mauricio Pasquale
Last year's Eclipse winner, a flagbearer for Moulton Paddocks in 2017, enjoyed a solo exercise over six furlongs and could reappear in the Group 2 Jockey Club Stakes at the Guineas meeting. 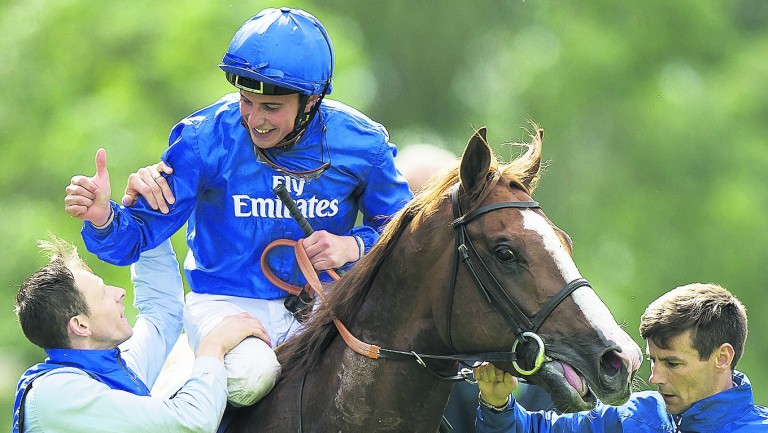 Skiffle
Kirsty Milczarek
Milczarek may have lost her main ride, Wuheida, to injury but this lightly raced four-year-old is not a bad replacement. The daughter of Dubawi looks to have wintered well judging by the way she travelled upsides Endless Time and will be expected to build on her sole success at Listed level at Goodwood last year.

Sound And Silence
William Buick
Godolphin send out their first two-year-old runner of the season on the opening day of the Craven meeting at Newmarket on Tuesday in the shape of this son of Exceed And Excel, who breezed five furlongs with Gold Town (Milczarek) and lead horse Mystic Moon (Lane). Gold Town, a son of Street Cry, is also going the right way.

Wolf Country
Shane Fetherstonhaugh
Fetherstonhaugh is best known for riding Frankel in all of his work and was seen to good effect on last year's Yarmouth maiden winner, who needed all of the stiff six furlongs to be seen to best effect. The son of Dubawi should stay at least ten furlongs but may need some juice in the ground to show his best.

Glittering Jewel
Kirsty Milczarek
As a half-sister to Kentucky Derby winner Street Sense it is no surprise this daughter of Bernardini can go a bit, and she did not disappoint in her exercise with Agathonia and Fashion Theory. The Darley homebred is pencilled in to make her debut in a maiden at Newmarket on Wednesday.