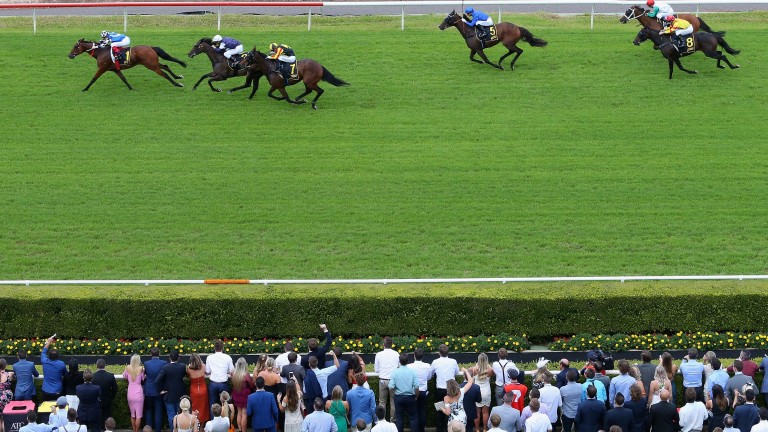 Big Duke won the Chairman's Handicap at Randwick last time and is favourite for the re-run of the Sydney Cup on Saturday
Jason McCawley
1 of 1
By Scott Burton 5:17PM, APR 20 2017

Penglai Pavilion, the mount of Kerrin McEvoy, and Polarisation (Corey Brown) passed the post in first and third in the race that never was a fortnight ago and the Charlie Appleby-trained raiders are among the favourites for the second attempt at Randwick on Saturday.

Stewards declared a no race just after the midpoint of the original running when two horses fell, although some jockeys pulled their mounts up while others raced on.

Appleby's assistant James Ferguson has overseen the pair's preparation for take two and is unconcerned about backing up their wasted exertions of two weeks ago.

"They both gave 110 per cent first time around and I can’t fault them this time," said Ferguson. "They’ve both done very well, they’re extremely fit and we’ve got the same jockeys on, so they know their horses.

"It’s going to be a bit strange watching the same race again, but we’re very happy with the condition of both horses."

Godolphin are also represented by Tally, while punters have made Big Duke favourite to follow 13 of the last 15 winners of the Sydney Cup who prepped in the Chairman's Handicap.

One intriguing new element comes in the shape of Lasqueti Spirit, who was not entered first time round and comes here off a third-placed effort in the Australian Oaks on the same card.

Who Shot Thebarman came down in the incident which led to the void race — which cost Almoonqith his life and left James Doyle on the ground – and will line up again on Saturday.

FIRST PUBLISHED 5:17PM, APR 20 2017
It’s going to be a bit strange watching the same race again, but we’re very happy with the condition of both horses and I’m looking forward to it

Forgive the gushing enthusiasm but I feel like I have seen something special Who is better - Hurricane Lane or Adayar? Our experts have their say Zain Claudette holds on to provide Ray Dawson with emotional first Group win Kings and queens of Ascot can illuminate the galleries on racing's day to shine One jockey, one trainer, one horse and one race to watch on Saturday Godolphin's Derby heroes Adayar and Hurricane Lane headline St Leger entries