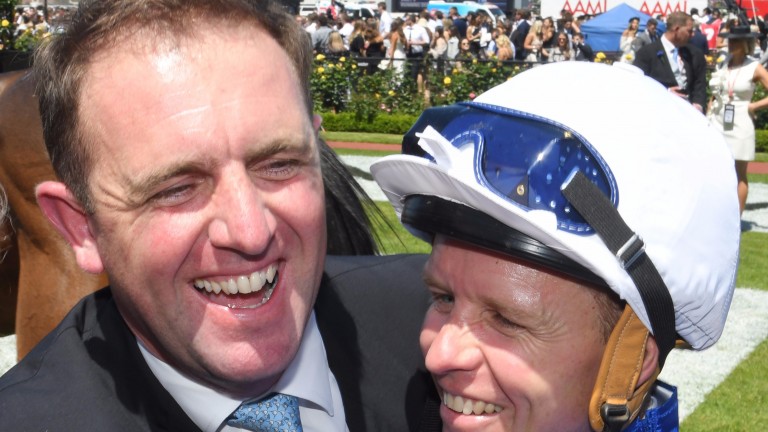 Charlie Appleby admits he is beginning to believe he could become the first British trainer to win the Melbourne Cup after Oceanographer guaranteed his big-race spot alongside stablemate Qewy with a thrilling victory in yesterday's Group 3 Lexus Stakes at Flemington.

Connections opted to pitch Oceanographer into the Lexus – which carries an automatic Melbourne Cup entry for a winner still in contention for the race – and the victory was much-needed, with Oceanographer otherwise requiring five runners to come out at the declaration stage.

The four-year-old's last-gasp success, snatched from Tom Melbourne in the shadow of the post under in-form jockey Kerrin McEvoy, was rewarded with a draw in stall 11 in Tuesday's race.

Qewy, who had his stablemate back in third in the Geelong Cup ten days earlier, will jump from barrier 15.

Appleby, who has booked Hong Kong-based Chad Schofield to ride Oceanographer and Craig Williams for Qewy, said: "Winning the Melbourne Cup is something I hadn't thought about much beforehand but now it's starting to become a bit more of a reality.

"I'm delighted we've got a decent draw, but whatever happens will be a bonus. It's been an enjoyable experience for the team and hopefully we can enjoy it a bit more."

There will be five Godolphin runners in the Melbourne Cup, with Saeed Bin Suroor pleased with draws of one and ten for Beautiful Romance and Secret Number.

Godolphin's Australian-trained race-favourite Hartnell, meanwhile, lost no supporters after he was handed stall 12.

Where did the last ten winners jump from?

The big winner among the Europeans was arguably Big Orange, who received a plum draw in seven, a far cry from his 23 of 24 last time around.

"This is obviously a much better draw in theory," said trainer Michael Bell. "We can do what we like from there, so it increases his chances and we're still hopeful of a big run."

At the other end of the spectrum was Wicklow Brave, who will jump from widest of all in 24, although Willie Mullins was not disheartened by the outcome.

"Even though it doesn't look the best draw, he might like to be on his own with a bit of daylight," said the trainer. "He won the Irish St Leger from the front and when he won the County Hurdle he was wide the whole way."

The Caulfield Cup winner's connections could not hide their delight and trainer Ciaron Maher believes his improving filly can complete a famous double.

"I've been delighted with Jameka's preparation so far and I really do think she could have improved again," he said

"She's in super order, very bright, and has been working well. And I have no concerns about the two-mile trip."

FIRST PUBLISHED 1:37PM, OCT 29 2016
Winning the Melbourne Cup is something I hadn't thought about much beforehand but now it's starting to become a bit more of a reality