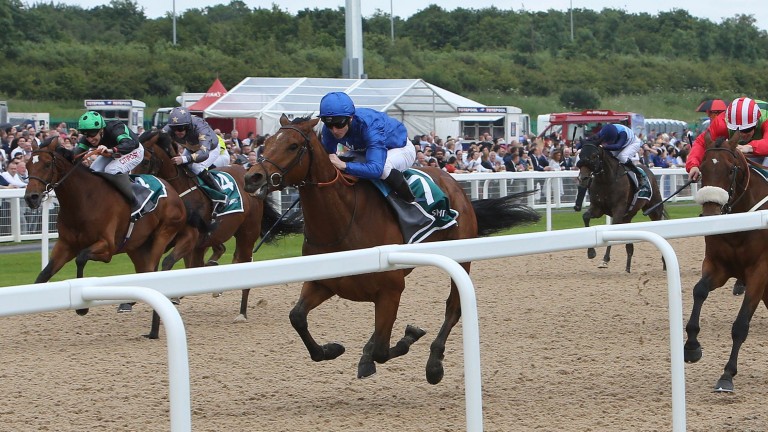 Antiquarium: back on Tapeta for the first time since winning the Northumberland Plate
JOHN GROSSICK RACING PHOTOGRAPHY
1 of 1
By David Milnes 1:15PM, JAN 15 2017

Godolphin's Antiquarium returns to Tapeta for the first time since his gutsy win in the Northumberland Plate in June in this second of four fast-track qualifiers for the marathon on All-Weather Championships finals day.

The winner of the 2m½f contest receives an automatic place for finals day on April 14, which Antiquarium's trainer Charlie Appleby went close to winning with Anglophile a year ago.

On his only subsequent appearance after winning the Plate at Newcastle, Antiquarium ran well to take eighth in the Ebor at York in August. He may strip fitter than Godolphin's other runner, the Saeed Bin Suroor-trained Famous Kid, who is having his first start in nearly a year.

Appleby said: "I was slightly tempted to take him out to Australia with a couple of my other stayers but we know he runs well on the all-weather and Good Friday will be a nice springboard into the turf season. I'd be disappointed if he's not bang there."

Sandro Botticelli carries a 3lb penalty for a win in Listed company at Sandown in July.

John Ryan, trainer of Sandro Botticelli
He's been off a while and has done enough at home to run a nice race but whether he's 100 per cent is another matter. He had a long old year in 2016, so he's had a nice break, and it will be interesting to see how he handles the track as he may need a stiffer test.

Charlie Appleby, trainer of Antiquarium
He's a proven performer on Tapeta, having won the Northumberland Plate as well as a maiden at Wolverhampton, and hopefully he can book his place for finals day. We always wanted to give him a break after he ran creditably in the Ebor as he's just a better horse on a synthetic surface.

Charlie McBride, trainer of Old Town Boy
He suffered a suspensory injury last year and had six months off and he's on his way back from that. He's sound enough now but will need the race.

Roger Varian, trainer of Steve Rogers
He's in good form and is consistent, so I'd expect him to give a good account on his return to Wolverhampton, where he has done well in the past. It's a tough race but we've always been minded to run him in this race, which will be his third before finals day.

Karl Burke, trainer of Intense Tango
We're killing two birds with one stone as we're using this as a prep for a Grade 2 hurdle at Doncaster at the end of the month. She's 90-95 per cent fit and, if she gets beat, we would concentrate on getting her qualified for finals day after Doncaster.

FIRST PUBLISHED 6:00PM, JAN 15 2017
We always wanted to give him a break after he ran creditably in the Ebor as he's just a better horse on a synthetic surface