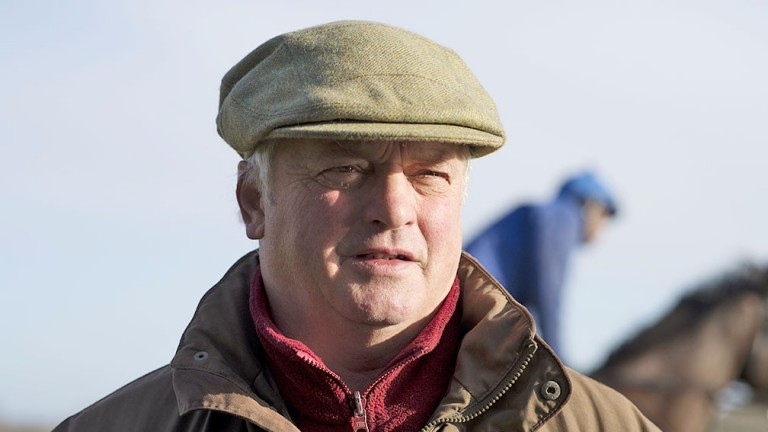 Colin Tizzard: trainer appears to have the key to the Cheltenham Gold Cup
Edward Whitaker
1 of 1
By James Burn 2:22PM, JUL 5 2017

The man who knows Timico Cheltenham Gold Cup dark horse Alary better than anybody has labelled the seven-year-old "out of the ordinary" as team Tizzard prepare to take the wraps off the horse in Saturday's Peter Marsh Handicap Chase at Haydock.

Regis Schmidlin has ridden Alary in 16 of his 20 starts and will be a fascinated observer when he makes his debut for Colin Tizzard.

Now carrying the colours of Ann and Alan Potts, Alary has won just twice in his career but was last year placed in the Grand Steeple-Chase de Paris and Prix la Haye Jousselin – two of France's top jump races – and this weekend gets the chance to show just why new connections have not hidden their admiration for him.

In Thistlecrack (4-5), Native River (5-1) and Cue Card (14-1), Tizzard appears to have the key to the Gold Cup, and Alary, whom he described this month as "bloody good", has fast become the race's talking horse.

Available at around 33-1 until recently, the son of Dream Well is as short as 16-1 now, although Betfair, William Hill and BoyleSports offer 25-1.

Schmidlin, who partnered Alary to his two victories, stopped short of saying he would win a Gold Cup but, like Tizzard, has nothing but enthusiasm for the chestnut.

"He's capable of going on any ground and loves a good trip – the longer the better," said the jockey, whose biggest win came on the prolific Questarabad in the 2009 Grande Course de Haies d'Auteuil, a race often referred to as the French Champion Hurdle.

"Alary is a very smart jumper and even though the fences in England are not the same as in France I think Mr Tizzard will have given him enough time to adapt to the fences.

"I don't have enough experience in England to say if he's capable of winning the Gold Cup, but I know he's out of the ordinary and very good at what he does – if Mr Tizzard doesn't have a jockey for him I can come over no problem!"

Unfortunately for Schmidlin, Aidan Coleman or Tom O'Brien are likely to do the steering at Haydock on Saturday, Tizzard's son and assistant Joe revealed yesterday.

He said: "He's been with us long enough now and has been working nicely. The plan is to run him and we'll find out a lot more about him.

"He's been running on fairly soft ground in France, which doesn't seem to have been a problem, but our gallops are woodchip and all-weather and he handles them fine.

"He's done everything we've asked of him. He was bought to be a Gold Cup horse and his French form is very good. He's already got a mark of 167 without running over here, so he certainly puts himself in the picture."

Alary was among 24 horses entered in the three-mile Peter Marsh, but his rivals will not include 2015 Grand National hero Many Clouds, who is now pencilled in for a clash with the mighty Thistlecrack in next week's BetBright Trial Cotswold Chase at Cheltenham.

His trainer Oliver Sherwood, who had mentioned Haydock as a possible stepping stone for his stable star, said: "I didn't enter him and he'll more than likely go to Cheltenham the following week. He's 100 per cent and, having discussed things with Trevor Hemmings and his racing manager Mick Meagher, we decided to give it a miss."

Many Clouds, a brilliant winner at Aintree last month on his first start since a breathing operation, is among the leading contenders for the National, which will be sponsored by Randox Health for the first time this year.

"Ground doesn't bother me with him, but he had his first run on relatively decent ground and I don't want to go and test his wind on bottomless ground and put him backwards," the Lambourn trainer added. "But I'm very happy with him – he's A1."

Conditions at Haydock were yesterday described as soft following 13mm of rain over the weekend, while more is forecast to fall until Thursday when temperatures will turn colder.

FIRST PUBLISHED 2:22PM, JUL 5 2017
He's done everything we've asked of him. He was bought to be a Gold Cup horse and his French form is very good