Talk of the Tracks SEDGEFIELD

Another four take unstoppable Hughes into third in table 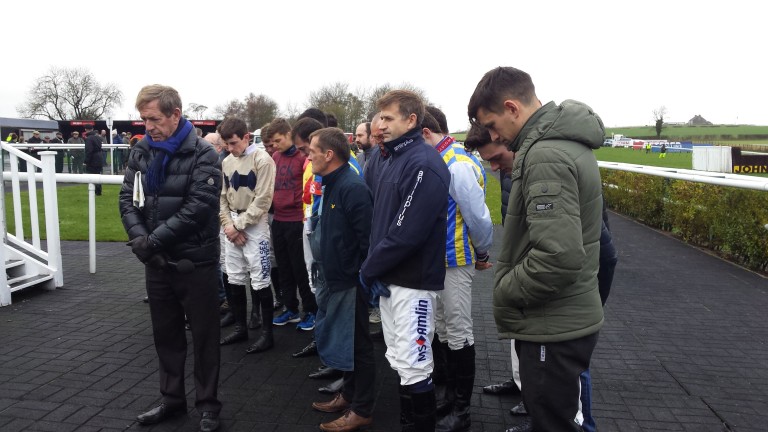 Jockeys and valets were among those to observe a minute's silence for Denys Smith at Sedgefield
David Carr
1 of 1
By David Carr 9:58AM, NOV 24 2016

Brian Hughes must be hoping that November will never end after another cracking day in an extraordinarily successful month.

Having ridden a five-timer at Musselburgh last week he had to settle for 'just' four winners this time, but that made it an astonishing 27 victories since October.

His latest burst of success took him into joint third place in the jump jockeys' championship behind Richard Johnson - whom he beat in a thrilling head-to-head in division two of the 2m1f handicap hurdle.

The title-holder had looked the likely winner when sending Greyed A to the front at the last flight but Hughes conjured an extra effort from the Rebecca Menzies-trained Stilo Blue Native and got him up for a neck victory.

Hughes also took the 3m2f chase on stablemate Nortonthorpelegend and division one of the hurdle on the Ken Slack-trained Discoverie, having earlier landed the feature novice handicap chase on Waiting Patiently.

"When you're on a roll things seem to happen," he said.

"My agent Richard Hale got me on the two in the handicap hurdles yesterday and he thought they would win. You always need a lot of luck and I have been lucky enough to get on the right horses."

Another in good form

Waiting Patiently is trained by Malcolm Jefferson, a man in form nearly as good as Hughes, with five winners and three seconds from ten runners before Tuesday.

After the evens favourite had scored by a ready seven lengths, Jefferson said: "The horses are running well and enjoying it.

"The horses just look well, they're eating well and I'm not killing them at home. They were all ready to run when we got a bit of rain and that's all there is about it."

Spread Boy had not won for 30 races and four and a quarter years, so success in the 2m handicap chase was welcome, particularly to Barry Murtagh.

"We've not had a winner since July," said the Carlisle-based trainer. "But we've not had many runners. We're quite low on numbers and we have only 15 horses in.

"It is not easy finding owners but Mr [Anthony] White has been very patient with this horse. He has been with us for ten years and he's a great supporter." 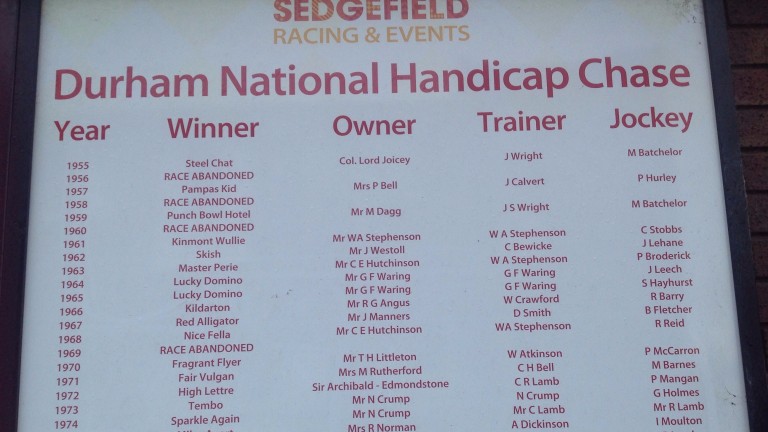 Red Alligator won the Durham National for Denys Smith in 1967, a year before his Aintree triumph
David Carr

Before racing there was a minute's silence to remember Denys Smith, who died last week.

Sedgefield was the nearest course to the trainer's Bishop Auckland base and his Red Alligator won the Durham National at the track before landing the Grand National in 1968.

Ground conditions were testing but the meeting was never in doubt despite around 20mm of rain in 24 hours before racing.

"The work done on drainage work in the last 12 months has really paid off," said clerk of the course Roderick Duncan.

"We have sand-slitted the home straight and most importantly there is a new drain in the horsebox park - in the past the water ran off there onto the course."

The novice handicap chase was a good race for Sedgefield and runner-up Burtons Well is worth looking out for along with winner Waiting Patiently.

FIRST PUBLISHED 4:33PM, NOV 22 2016
You always need a lot of luck and I have been lucky enough to get on the right horses