Anchor Down looks the one to beat in Cigar Mile 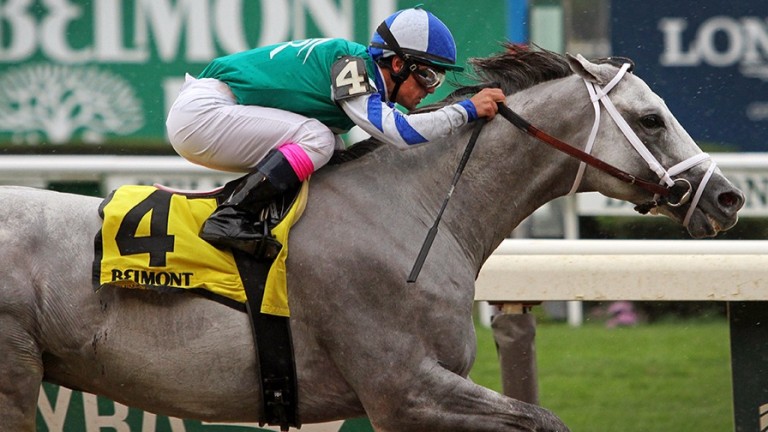 Anchor Down (Todd Pletcher/Jose Ortiz) concedes weight all round as he breaks from the rail in a ten-runner field for the Cigar Mile; the $500,000 highlight of a quality card at Aqueduct shown live on ATR.

On his most recent appearance, the five-year-old grey made all to beat Tamarkuz in the Kelso – and Tamarkuz went on to win the Breeders' Cup Dirt Mile, a race Anchor Down bypassed to wait instead for the Cigar Mile.

"He's got good tactical speed and it seems like he's proven that a one-turn mile is his favourite trip," said Pletcher. "That's why we decided to wait for the Cigar Mile instead of taking him to the Breeders' Cup."

Sheikh Hamdan's Shadwell team are hoping for big things from eight-length maiden winner Takaful (Kiaran McLaughlin/Jose Ortiz), who steps up to stakes company for the first time in this important two-year-old trial. Connections won the race last year with Mohaymen.

Argentine horse of the year Hi Happy (Felipe Souza/Altair Domingoz), who won last year's Gran Premio Carlos Pellegrini – the 'South American Arc' - makes his US debut in a loaded race also featuring Om (Dan Hendricks/Gary Stevens), back up in trip after being touched off in the Breeders’ Cup Turf Sprint.

Grade 1 winners What A View and Ring Weekend plus Vyjack, who broke the track record at Santa Anita last month when he beat Om in a Grade 2 event.

FIRST PUBLISHED 6:00PM, NOV 25 2016
We decided to wait for the Cigar Mile instead of taking him to the Breeders' Cup