An in-depth look at the eagerly awaited Commonwealth Cup 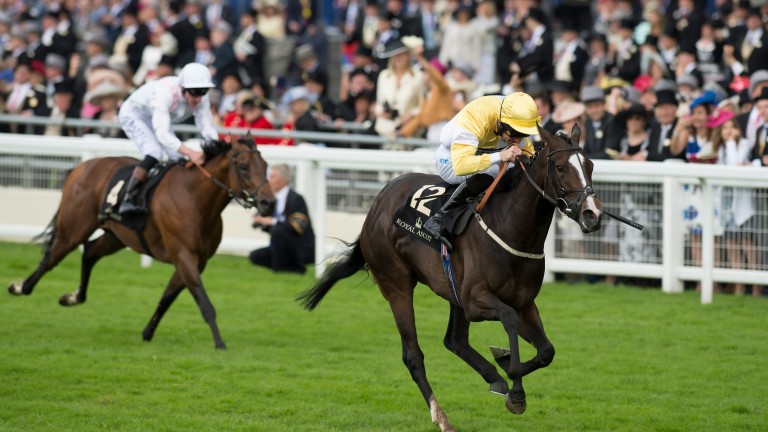 Quiet Reflection storms home under Dougie Costello to win the Commonwealth Cup at Royal Ascot for the Karl Burke stable
Edward Whitaker
1 of 1
By David Jennings 9:22AM, JUN 14 2017

The foundations of Royal Ascot are rooted deeply in tradition, but the spirit of innovation has also taken the meeting down new paths – and the most adventurous avenue is the birth of the Commonwealth Cup.

The sexy new sprint for three-year-olds will be the standout showdown for many next week as Caravaggio, Blue Point and Harry Angel face off over six furlongs.

Caravaggio, Blue Point and Harry Angel may well not have been on this collision course were it not for the Commonwealth Cup. Aidan O'Brien had pencilled in the French 2,000 Guineas for Caravaggio but had a rethink following some breathtakingly fast home work.

Speaking after Caravaggio's unbeaten run was stretched to five in the Lacken Stakes at Naas last month, O'Brien said: "He's an unbelievably quick horse. We've never seen one quicker than him at home and that's why we're going to keep him sprinting. The Commonwealth Cup will be his next race, all going well."

There was no such option a few years ago. Caravaggio would most likely have travelled to Chantilly, Blue Point could have challenged Churchill at Newmarket, and who knows where Harry Angel would have appeared. Now all three are due to run against their own age group over their optimum trip on the biggest stage of all.

The first running of the Commonwealth Cup was in 2015 and the inaugural winner was the mighty Muhaarar. Just like Blue Point he won the Gimcrack at two and ended his three-year-old career as champion sprinter after supplementing his scintillating Royal Ascot success with victories in the July Cup, Prix Maurice de Gheest and Champion Sprint Stakes.

Limato, who got closest to Muhaarar in the Commonwealth Cup, won the July Cup last year and remains one of the top sprinters around with a mark of 122.

Profitable (fifth) is also a Group 1 winner following his King's Stand triumph last year. Home Of The Brave (sixth) has won three times since and boasts a rating of 114. Adaay (seventh) won the Group 2 Hungerford Stakes on his next start, while Kool Kompany (tenth) and Jungle Cat (18th) are now rated 114 and 112. It's fair to say it was a sprint of the highest standard.

Last year's heroine Quiet Reflection went on to beat her elders in the Sprint Cup at Haydock in September, while the third, Washington DC, was runner-up in the King George Stakes and Prix de l'Abbaye.

The Commonwealth Cup is a breeding ground for future sprinting stars. The new path was certainly one worth travelling.

But what of old paths and the knock-on effect of the Commonwealth Cup?

For starters, the 6f Diamond Jubilee was closed to three-year-olds, depriving us of that always fascinating battle between would-have-been Classic contenders and more experienced sprinters.

The Diamond Jubilee field has, unsurprisingly, shrunk. Twilight Son beat just eight rivals last year, although there was a field of 15 when Undrafted won the year before. The average field size between 2010 and 2014 was 17.2.

Apart from Kingsgate Native (2008) and Art Connoisseur (2009), the only other three-year-old winner of the Diamond Jubilee in 20 years was Atraf in 1996. Three winners in two decades. Something had to change.

The 2,000 Guineas field size has dropped too. There were 18 runners in 2015, 13 in 2016 and ten this year. It seems connections of uncertain stayers are no longer trying to stretch their stamina out to a mile and instead holding fire for the Commonwealth Cup.

Unlike the Diamond Jubilee, the King's Stand remains open to three-year-olds – but none have taken part since the Commonwealth Cup came along.

A quartet of three-year-olds tackled Sole Power in 2014, including favourite Hot Streak, who was beaten a length and a half into third.

The same number took on Sole Power in 2013 as well, with Reckless Abandon doing best of the brigade in fifth. Since the turn of the millennium, there have been only two three-year-old winners of the King's Stand – Equiano (2008) and Dominica (2002).

There's no doubt the Commonwealth Cup has been a success on a variety of measures, but it has placed a dimension deficit order upon the other two sprints at the royal meeting, and the 2,000 Guineas.

Hopefully, with Lady Aurelia on target, there will be at least one three-year-old in this year's King's Stand, to be followed a few days later by an uncommonly good Commonwealth Cup.

Caravaggio RPR 120
It was obvious Caravaggio was something special when he was sent off a 1-3 chance at Dundalk on his debut and proceeded to register an unusually high Racing Post Rating for a newcomer. We have seen nothing to change that opinion since, and the only shame is that he was ruled out of the big autumn races like the Middle Park by injury, having impressed when beating Mehmas in the Coventry and when storming clear of stablemate Courage Under Fire in the Phoenix Stakes.

The 2,000 Guineas was perhaps never seriously on the cards for a horse described as "one of the fastest I've ever seen" by Aidan O'Brien, who from a long way out had Churchill for that in any case, and Caravaggio reappeared in a Group 3 at Naas, where he made short work of inferior opposition. Still unbeaten, he remains an exceptional prospect.

Blue Point won for the third time from his first four starts when impressive in York's Gimcrack Stakes, having been worried out of the Richmond Stakes at Goodwood the time before by Mehmas, and although he subsequently came up short in the Middle Park and Dewhurst he ran well both times.

Conditions of Ascot's Pavilion Stakes favoured him on his reappearance, as he received 4lb from Harry Angel, but he confirmed himself a smart sprinter by making the most of the weight concession to score by a length and a half. He is a classy enough colt, but it is perhaps telling Godolphin still felt the need to splash out on the Pavilion runner-up.

Harry Angel did well to win the Group 2 Mill Reef Stakes at Newbury on just his second start as a two-year-old, and he emerged with considerable credit when failing honourably under a 4lb penalty against Blue Point in Ascot's Pavilion Stakes on his return.

He could not have been more impressive when making all to beat Second Thought for a second Group 2 success in Haydock's Sandy Lane Stakes, and was sold privately to Blue Point's owner Godolphin afterwards. Clive Cox, who does especially well with sprinters, thinks the world of him, and there is every likelihood there is more to come.

If Godolphin were that happy about Blue Point's chances of Commonwealth Cup glory, why did they feel the need to buy one of his big rivals for the race, Harry Angel? That could be construed only as a negative, and consequently this looks like a match between Caravaggio and Harry Angel. Often when matches are expected, however, they fail to materialise. Hopefully that won't be the case here, but Harry Angel seems a very excitable horse, hard to keep a lid on, and has been beaten on his two appearances at Ascot. That just sways me towards Caravaggio, easy winner of the Coventry at the royal meeting last season.
Nick Watts, Racing & Football Outlook

Caravaggio has dominated every contest in which he has competed and has a progressive profile, having improved his RPR with each of his starts. He couldn't have been more impressive when bolting up by four and three-quarter lengths on his reappearance at Naas and remains unexposed and open to further improvement after just five starts. He has already won over course and distance and, if there is a superstar sprinter running at Royal Ascot this year, it's probably him. There's not much between Blue Point and Harry Angel judged on their course-and-distance meeting last month, in which Blue Point scored by a length and a half. But Harry Angel was conceding 4lb and has since shown improved form in thrashing his rivals by four and a half lengths in the Group 2 Sandy Lane at Haydock last month. Clive Cox's sprinters usually improve with racing and I expect Harry Angel to reverse form with Blue Point. But both might struggle to cope with a peak-form Caravaggio.
Graeme Rodway, The Edge

There's only 2lb between the three on official ratings so it's easy enough to argue there shouldn't be so much difference between them in the betting. In my opinion Caravaggio is the most likely winner as I think he could be really special, but when it comes to punting I'm likely to end up siding with Blue Point, who becomes something of a free bet at 5-1 or bigger each-way. Most, myself included, were of the opinion Harry Angel would beat reverse recent Ascot form if they met again, but there's no reason why Blue Point won't also improve for his first run. Add the fact Harry Angel is highly strung and headstrong and he's probably the one likeliest to blow out altogether. I hope not as we could see three really good sprinters next Friday, but it's Blue Point each-way for me at the odds.
Paul Kealy, The Edge

WHAT THE TRAINERS SAY

Aidan O'Brien on Caravaggio
All is good with him. We've been happy with him since his win at Naas. The faster the ground, the more he'll like it.

Charlie Appleby on Blue Point
He has always been at the top table. He knows nothing else, and he has never been out of the first three in seven starts. He is my best chance next week.

FIRST PUBLISHED 7:17PM, JUN 13 2017
The Commonwealth Cup is a breeding ground for future sprinting stars. The new path was certainly one worth travelling