American Tom out to secure place at Festival 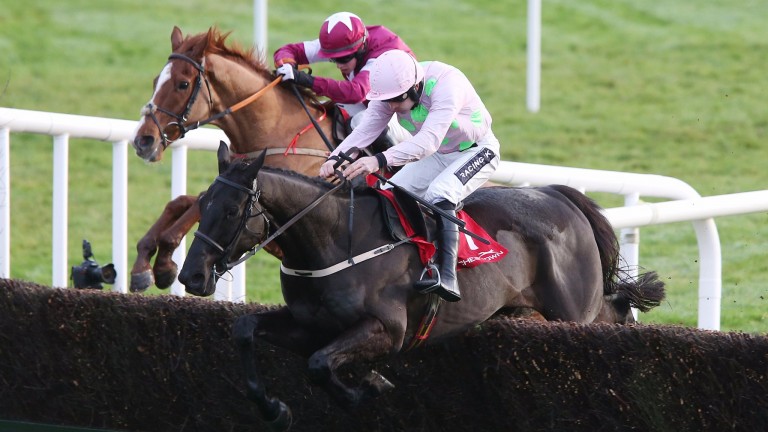 American Tom out to enhance his Cheltenham claims at Naas
CAROLINE NORRIS
1 of 1
By Brian Sheerin 9:24AM, JAN 8 2017

Just the four runners will line up for this and everybody bar the connections of Some Plan, Road To Respect and Stone Hard will be disappointed not to see Yorkhill declared.

Instead, Willie Mullins relies on impressive Punchestown beginners' chase winner American Tom, who may yet bump into Yorkhill if their paths cross at the JLT Novices' Chase at Cheltenham.

Already just a 10-1 shot for the JLT Novices' Chase, victory for the Rich Ricci-owned American Tom could see those prices tumble this afternoon.

Mullins said: "He won his only start over hurdles last season and he started off well over fences when winning over two miles at Punchestown last month.

"Based on his Punchestown performance, where he jumped left at a few of his fences, you would have to think that he would be better off going left-handed here at Naas.

"He will handle the ground and we are looking forward to a good run from him. This will be a tougher assignment for him and we will find out where he fits in among the ranks of our novice chasers."

Gigginstown are doubly represented in the four runner affair with Stone Hard and Road To Respect. Stone Hard belatedly got off the mark over fences last month for Gordon Elliott at Limerick while Noel Meade’s Road To Respect seemed to cope well reverting in trip when making the frame behind Min in the Grade 1 Racing Post Novices' Chase at Leopardstown.

Eddie O’Leary, Gigginstown’s racing manager, said: “Road To Respect will appreciate a big galloping track like Naas and he has won there before. He is still a young horse, he is developing and any rain that falls between now and race time will suit him.

“Stone Hard is a classy horse but he has a few little problems. He can bleed, and if he doesn’t bleed today, he would run a big race. He ran very well at Limerick last time and hopefully he can build on that.”

The Henry de Bromhead-trained Some Plan has not been seen since stumbling on landing when he had yet to be asked a question by David Mullins at the second last fence in a Grade 2 Novices’ Chase at Cheltenham in November.

Mullins believes that if the Winged Love gelding was to run anywhere near that level of form today, he would be entitled to run a big race.

He said: “He was in the process of running a big race at Cheltenham. He’s the type of horse that doesn’t really hang about and he likes to get on with things. He doesn’t spend long in the air when negotiating his fences, and with a clear round, I think he will run well.”

FIRST PUBLISHED 6:00PM, JAN 7 2017
This will be a tougher assignment for him and we'll find out where he fits in among the ranks of our novice chasers