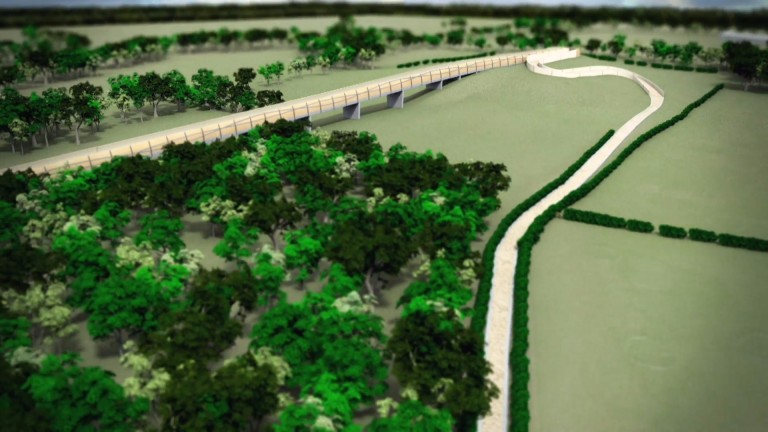 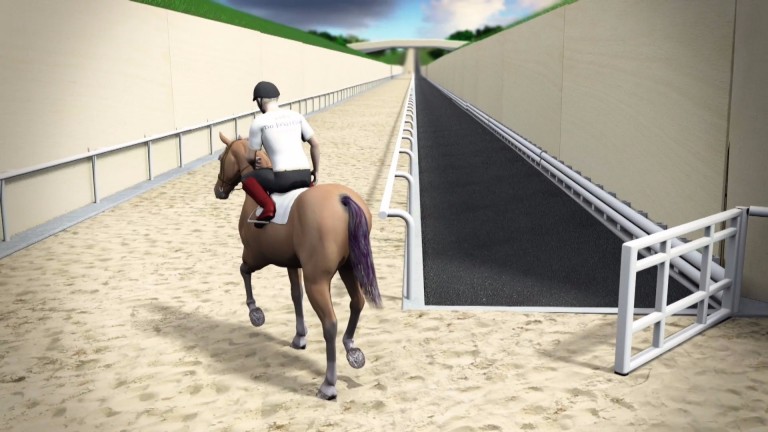 An overhead view of the proposed Hill Gallop at Newmarket
1 of 2
By Peter Scargill UPDATED 1:20PM, SEP 7 2017

Newmarket's 'gallop in the sky' has moved a step closer after planning permission was granted on Wednesday for the ambitious £10 million project.

Plans were revealed last summer for a new gallop on Racecourse Side in Newmarket that would be similar to Warren Hill and, therefore, help increase the number of trainers setting up away from the more popular Bury Road.

The news has been welcomed by trainers based Racecourse Side. Mark Tompkins, chairman of the Newmarket Trainers Federation, said: "I'm delighted, as is all of Newmarket I'd imagine, but especially us trainers on this side of town.

"There's still a long way to go but this is a big step forwards and it's marvellous we're looking ahead.

"Once this is started there's so much scope for further improvements and new yards being built. People will always head to Newmarket, but with this addition and the discussions around the all-weather track it's a fantastic time for Newmarket."

Occupancy on the Bury Road side of Newmarket, where the likes of John Gosden, Sir Michael Stoute, Roger Varian, William Haggas and Luca Cumani are based, is estimated at 90 per cent. By comparison, Racecourse Side is thought to be at around 60 per cent occupancy.

The proposed construction of the 900-metre long state-of-the-art gallop on Hamilton Road is expected to help Racecourse Side become more popular with trainers, who currently must undertake a 40-minute trip across town to access Warren Hill.

Stuart Williams, who trains on the Hamilton Road, said: "Getting an artificial hill gallop is brilliant. Currently there's so many pre-training yards for stables based on Bury Road and hopefully this might help redress the balance.

"It's so congested that side and I've changed my training routine so we don't have to go over there. Hopefully it will attract more trainers and owners to this side of town."

The new Hill Gallop will start below ground level and rise up 30m on to an elevated bridge before finishing on a man-made mound. Warren Hill, where up to 2,000 horses train each day, has a 40m incline. Inspiration for the project came after officials visited Japan to view similar gallops.

George Scott was another trainer based on the Hamilton Road who gave his approval. He said: "It's a fantastic initiative from the Jockey Club and it's going to give us another dimension to our training.

"Using a hill is not totally imperative as a trainer but I do head across town once or twice a week. It's often very congested and this will allow me not to have to make the trip across."

While construction remains some way off, the granting of three-year planning consent by Forest Heath District Council has enabled Jockey Club Estates (JCE) to move on to the next stage of the process.

Nick Patton, managing director of JCE, said on Wednesday: "Naturally, we are very pleased the planning committee has approved the plans for the construction. Securing planning permission is an important and essential stage of the project, but there is still some way to go before we can commence construction.

“It's an ambitious project and the next steps are the development of detailed plans for the gallop’s construction and addressing the funding options for the project.

"The proposal is built around the objective of increasing the racing industry’s contribution to the local economy through attracting more horses and business to Newmarket. However, in the aftermath of the Brexit vote there is no doubt that we are in a more challenging environment for securing such funding support."

He added: “This is about Jockey Club Estates planning ten, 15, 20 years ahead, and Newmarket maintaining its status as a world-class centre of excellence for the training of thoroughbred racehorses. The proposal for a the Hill Gallop project remains a key part of a wider masterplan to make Racecourse Side more attractive to trainers.”

Progressive Defoe limbers up for Leger with effortless workout

FIRST PUBLISHED 9:24AM, SEP 7 2017
The Hill Gallop project remains a key part of a wider masterplan to make Racecourse Side more attractive to trainers