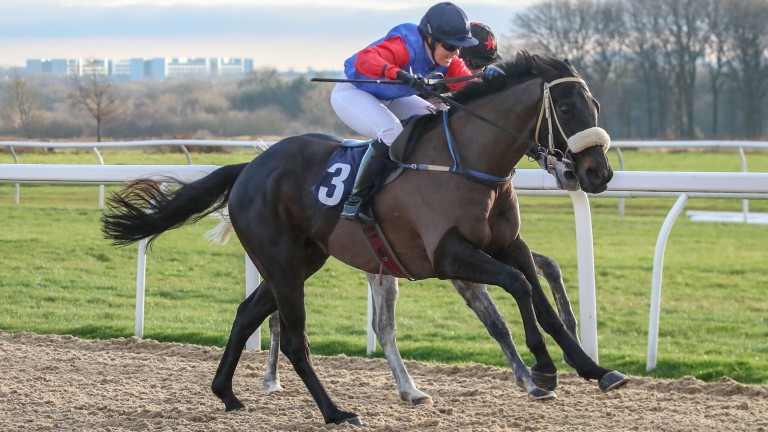 Belabour and Becky Brisbourne in winning form at Newcastle earlier in the year
John Grossick (racingpost.com/photos)
1 of 1
By Lewis Porteous UPDATED 6:05PM, APR 1 2019

Amateur rider Becky Brisbourne is poised to appeal against a 14-day ban for failing to "take all reasonable and permissible measures" to obtain the best possible placing on fifth-placed Belabour at Doncaster on Sunday.

Stewards said Brisbourne made her effort too late on the six-year-old, who ran on from the back to be beaten a length and a quarter in the 1m4f handicap for amateurs.

Assistant trainer to her father Mark at the family's yard in Shropshire, a shocked Brisbourne said the suspension would keep her out of action until mid-July.

She described Belabour as a "quirky" individual who had to be ridden with patience to show his best.

"No one knows and cares more about that horse than me. The previous syndicate who owned him gifted him to me when they decided they didn't want to continue with him and they messaged me yesterday to say they will send a letter to the authorities to say that is how the horse is ridden," she said.

"At home he's never ridden with another horse. He's just incredibly quirky and very sensitive. If you get into an argument or hit him you're never going to win. When I won on him at Newcastle I did exactly the same."

Sent off at 33-1, Belabour was at one stage in danger of becoming detached, according to Brisbourne, before making headway out wide over three furlongs out and staying on strongly in the final furlong.

The Racing Post analysis of the performance read: "Behind, headway on wide outside over 3f out, ridden along 2f out, stayed on well final furlong, nearest finish."

The horse was checked twice at the track by vets and Brisbourne said: "He's got multiple problems and has had kissing spine operations and I wasn't 100 per cent if he'd go on the quick ground. The main instruction was to get him into a rhythm and bring him home in one piece.

"We hoped the course would suit him and I said all this to the stewards but I think they'd already made their mind up. Nobody would want to win on him more than me and if there's any implication I was trying to get him beat that certainly wasn't the case.

"I wasn't travelling at any point through the race – I was never on the bridle. At one point I thought we could end up pulling up as he was hating it. I don't know if they are implying I should have hit him when he was trying to detach himself but I don't think that would have done him any good.

"I should have pushed myself harder in the stewards' room but I was so surprised to be in there in the first place having been really pleased with him."

Brisbourne, 24, who has ridden 11 winners, has seven days in which to lodge an appeal. The rider's father, who also trains Belabour, is among those supporting such action.

She added: "We've not had a chance to sit down and go through the race yet but he said he's planning to appeal and wants me to. If it had been one or two days you might take the slap on the wrist but 14 days for an amateur, when I have multiple races lined up, is half the season and it's going to be July before I can ride again."

FIRST PUBLISHED 2:39PM, APR 1 2019
If you get into an argument or hit him you're never going to win. When I won on him at Newcastle I did exactly the same

Will the River Don prove an 'easy route' for Unanswered Prayers? 'He should go very close' - Paul Kealy provides six Saturday big-race tips Fusil Raffles and Cap Du Nord among leading fancies in wide-open Sky Bet Chase In Shishkin's footsteps: Lightning Chase may offer clues for wide-open Arkle One trainer, one jockey, one horse and one race to watch on Saturday Back in the fray: Josh Moore returns to action on Friday after spinal surgery