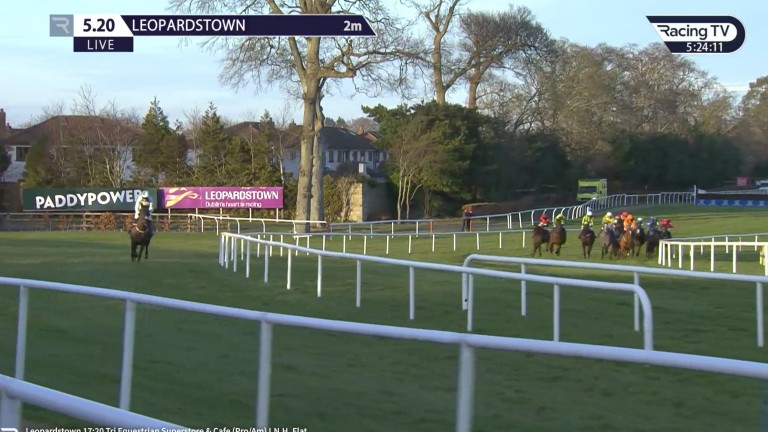 Lake Winnipesaukee (left) on the chase course rather than the inner line used for bumpers at Leopardstown
Racing TV
1 of 1
By Justin O'Hanlon UPDATED 9:30PM, MAR 7 2021

Amateur rider Aaron Fahey was suspended for 14 days by the Leopardstown stewards after his mount Lake Winnipesaukee took the wrong course off the final bend in the concluding bumper while in a clear lead and with the race possibly at his mercy.

The newcomer pulled his way to the front after about two furlongs and soon opened up a clear advantage. With half a mile to go, before they turned out of the back straight, the Arcadio gelding was still around 13 lengths clear and as they approached the home straight, the chasing group seemed to be making little impression on him. However, events took a turn at that point as Fahey seemed to steer his mount off the track and he ended up on the chase course.

Relive the surprise events from the Leopardstown bumper

In the inquiry which followed, Fahey stated to the stewards that his saddle had slipped forward, that his mount had been too strong to ride and through a lack of energy he was unable to steer his mount around the final bend onto the correct course.

However, the stewards found that Fahey had been negligent by misjudging the correct course and therefore had failed to attain his best possible placing and was banned for 14 days under rule 212. 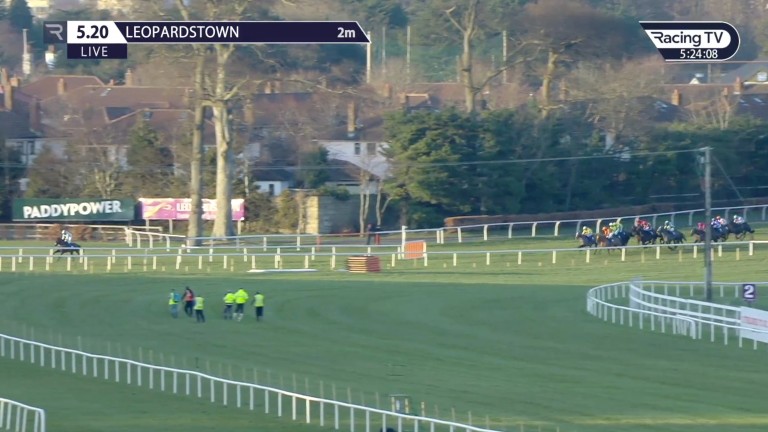 The horse is trained by the rider's father Paul, who said: "He is a difficult horse and we haven't been able to run him in a schooling race, and this is the first day he was among horses on an open track. He did get very wound up and I don't really know what happened turning in. It's just one of those things and hopefully everyone will learn."

Great stories from the racecourse:

The race was won by the Willie Mullins-trained debutant Dark Raven, ridden by his son Patrick.

FIRST PUBLISHED 6:45PM, MAR 7 2021
It's just one of those things and hopefully everyone will learn

Shishkin v Energumene round two could be 'even more exciting' - Henderson Shishkin is triumphant on a day when it was good to have shares in goosebumps Clarence House analysis: start was crucial in giving us the contest we craved 'We hope a clear round will be enough' - Willie Mullins looks for Allaho repeat Energumene v Shishkin: the worst-case scenario is still entirely possible, folks From the favourite to a dark horse: four hot Arkle topics plus analysis and tip