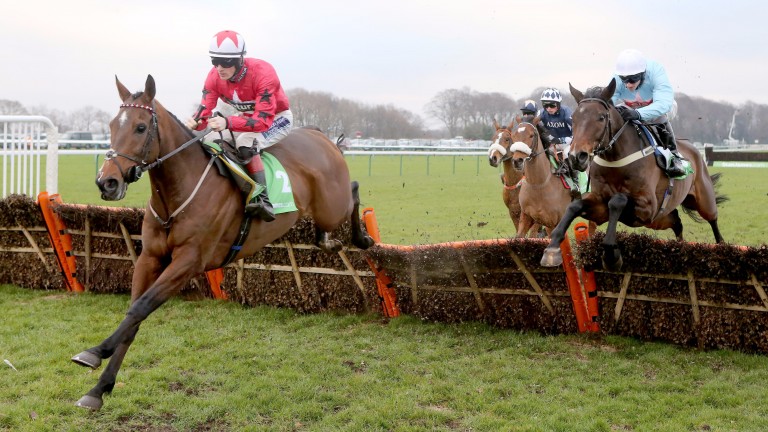 The New One will be making his seasonal debut at Ffos Las with amateur Zac Baker
JOHN GROSSICK RACING PHOTOGRAPHY
1 of 1
By Keith Melrose UPDATED 6:48PM, OCT 18 2017

For just the third time in his 32-race career, popular hurdler The New One will be partnered by a jockey other than Sam Twiston-Davies after the surprise news that amateur rider Zac Baker will ride him in the Ladbrokes Welsh Champion Hurdle on Saturday.

Baker, the stable amateur at trainer Nigel Twiston-Davies's yard, is following in the footsteps of racing luminaries Richard Johnson and Noel Fehily, the two riders to have previously deputised.

"I was quite shocked when they said I was riding him, I thought it was a joke," said Baker at Wetherby on Wednesday. "They told me last week just before the entries but you don't really believe it until you see your name in the paper."

Sam Twiston-Davies continued to ride The New One after taking the job as stable jockey to Paul Nicholls and has always held the dual Grade 1 winner in high regard. Baker can now see why.

"I sat on him on Monday and he was in a different league," he said. "You have to set your gauges a bit differently on a good horse, he does everything a lot easier and a lot quicker."

The nine-year-old has won 18 of his 31 starts and is closing in on the £1 million mark in prize money, a relatively rare feat for a jumper.

However, his new rider is keeping the task in perspective: "I'm looking forward to it but you can't get above yourself, they've all got four legs haven't they?"

On Wednesday evening, The New One could be backed at a best-priced 5-1 with the sponsors for Saturday's race. He was favourite on most lists, just ahead of old rival Clyne who pushed him to a length in Haydock's Champion Hurdle Trial last season.

FIRST PUBLISHED 6:12PM, OCT 18 2017
You have to set your gauges a bit differently on a good horse, he does everything a lot easier and a lot quicker

Chepstow and Ffos Las able to welcome crowds back from next week 'She should have been 4-1 not 40-1!' - Pay The Woman rewards Keighley faith