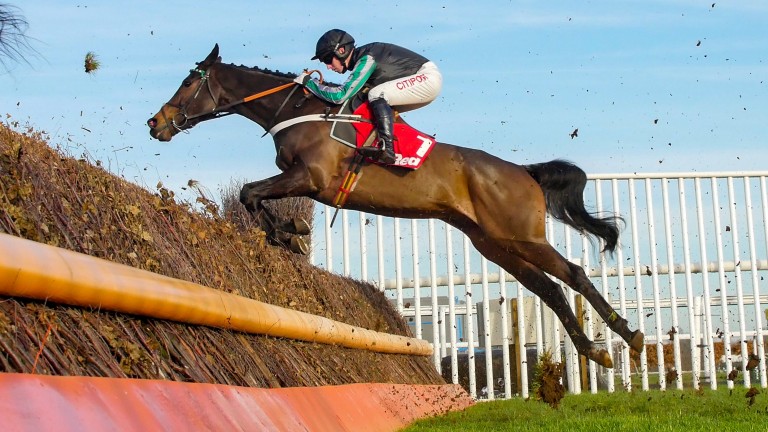 Altior and Noel Fehily on their way to the easiest of wins in the 32Red.com Wayward Lad Novices´ Chase
Mark Cranham
1 of 1
By Graham Dench 3:55PM, DEC 27 2016

Nicky Henderson described it as "nearly a ten out of ten", while Noel Fehily did not think he had ever ridden an easier winner.

If that was not enough praise for Altior's effortless dismissal of the useful Marracudja in the 32Red-sponsored Wayward Lad Novices' Chase, bookmakers were equally impressed, as the six-year-old is now as short as evens with Paddy Power and Coral for the Racing Post Arkle Chase.

His trainer has always had a way with two-mile chasers and Arkle winners and Remittance Man, Sprinter Sacre and Simonsig are among his eight previous winners of Kempton's Grade 2. Last season's Supreme Novices' winner, beaten only twice in 11 starts, is now firmly in that bracket.

Henderson said: "You couldn't fault him. I had a nice text last night from Joe Chambers [racing manager to Rich Ricci], saying, 'Over to you Altior' after Min had won. I could now text back, 'Matched!' It looks like we're heading for a rematch.

"This is a very, very good horse. There's no doubt about it, but we saw that over hurdles. It was a big decision whether to switch, but this is what he should be doing and we are not regretting it at the moment.

"The question now is do we need to give him another run. Last year we went to Cheltenham from here, but we used the Game Spirit for Sprinter on the way in, and that's a possibility. I don't know that we need to do that, but we'll sleep on it."

Fehily, standing in again for the injured Nico de Boinville, a spectator here, added: "They always said how good he is before I ever got on him, and I'm just very lucky to be sitting on him. His jumping is getting better with every run.

"He's more assured now in what he's doing, although at Sandown those few little mistakes early on were as much through me not knowing him as anything. Now that I know him better, his jumping is very, very good."

With better luck Henderson would have won Boxing Day's big novice chase too with Might Bite, who was nearly 20 lengths clear when falling at the last.

He said: "There are a few bashes and bruises around the place from Boxing Day but Might Bite is better than most, although while physically sound, you do worry about the mental scars from such a horrible fall.

"He would have been quicker than Thistlecrack was in the King George, which is pretty extraordinary. He killed the race miles out."

Attempted theft of Altior's half-sister has breeders 'still in shock'