A pixel in it: Alpha Delphini edges Mabs in superb finish as Battaash flops 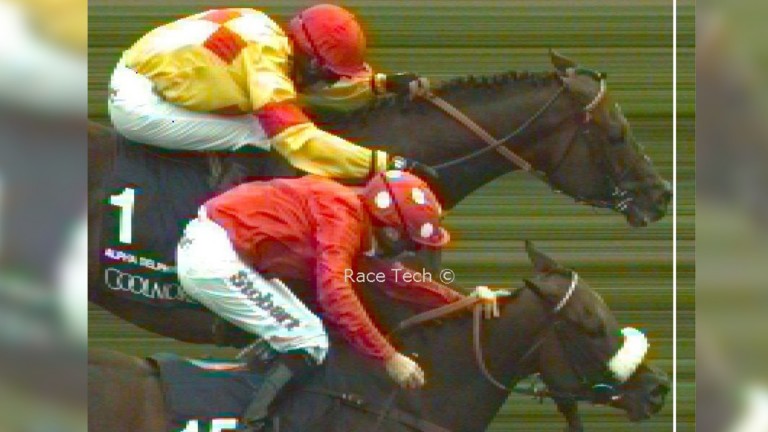 The form book will say this was a race won by a nose, but in fact it was won by a single pixel on a photo print, with a tiny pinprick of darkness against a green background the only difference between Alpha Delphini and Mabs Cross.

It took five minutes to determine the result of the Nunthorpe and it is hard to know whether the connections of the two northern-trained sprinters who surprisingly fought out the finish or the judge who had to inspect the important decision found those moments more agonising.

In the end the result was called in favour of Alpha Delphini, sparking emotional celebrations that were half ecstasy, half an outpouring of relief – a winning margin has never been more marginal.

A close finish had not been expected. Battaash, the odds-on favourite with the golden shoes, was supposed to leave this field in his dust and confirm his status as the fastest thoroughbred in the world.

Yet Battaash fluffed his lines in the Nunthorpe for the second year in a row. There was no repeat this time of the edginess that ruined his chances in 2017, he just wasn't good enough on the day, hitting the front inside the last two furlongs but failing to power away from the field as expected. He once again finished fourth, a neck behind Blue Point but over two lengths off the front pair.

What a battle they served up, duelling magnificently every stride of the last 100 yards, first one head in front, then the other. To the eye they were inseparable at the line. Dead heat, many confidently predicted as seconds turned into minutes and the wait for a result went on.

Alpha Delphini's trainer Bryan Smart was emotional when the result was eventually called in his favour, a third top-tier victory 22 years after his first.

"It's fantastic," he said. "This horse... all week it's been building up... and to wait that long for that third Group 1. His half-brother [Tangerine Trees] has done it and he's done it on the best course in the world."

Of the 40-1 winner, rated 19lb behind Battaash and last seen placing second in a Listed race over course and distance, Smart added: "He has back problems. He gets massaged, gets looked after like he's a king. Today I just knew he was so well. He was more relaxed than I've ever seen him. Beck [Edmunds] the head girl led him up and we just knew. We've landed the one I've always wanted."

Victory meant winning rider Graham Lee completed what must rate as the most unlikely double in racing: a Grand National, won in 2004 on Amberleigh House over the longest trip in British racing, and a Nunthorpe run over the shortest. Two great races and a personal achievement that stands as testament to his versatility and talent.

"It's a bit mad, isn't it?" Lee said of his long career. The top jockey, who two years ago courageously revealed he had battled with depression, philosophically added: "I'm riding the rollercoaster, I'm enjoying the ride and when it stops I'll get off and say thanks a million." 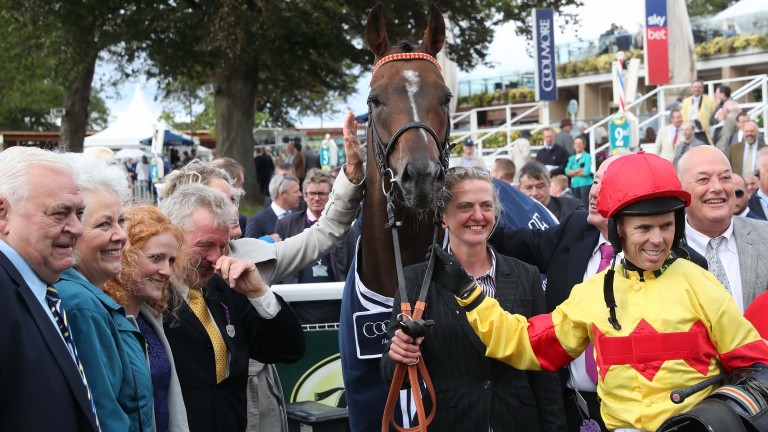 Lee, also winner of the jump jockeys' Nunthorpe here in June on the Smart-trained Fendale, admitted he had no idea if he had won when he crossed the line alongside Tom Eaves on Mabs Cross.

After such an agonising loss it would have been understandable if the runner-up's connections were too torn to speak, but the Mabs Cross camp gracefully accepted defeat.

"Don't worry, we're fine!" said owner David Armstrong's wife Emma. "It's another northern winner, so we're so thrilled. We never thought we'd won and we never expect to win. She's home-bred and she's run a marvellous race. You can't get any better than that."

Trainer Michael Dods, a whisker away from winning the Nunthorpe for a third time in four years following his double with Mecca's Angel, said: "She's run her heart out. We knew she was A1 today and they went a bit too quick, which played into her hands. It's disappointing to come so close and not win but I'm very proud of her."

Eaves, who received a four-day whip ban, added: "Fair play to Graham and Mr Smart. Very well done to them. Our horse ran a fantastic race. It was so great."

Smart did not commit to any plans for the winner, who has an entry in the Prix de l'Abbaye. "He might go to France," he said. "If not, he's done enough for us today."