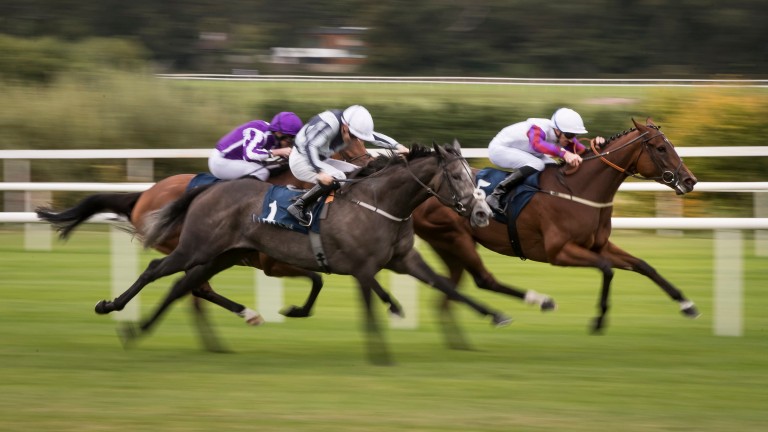 Alpha Centauri (1) fails to claw back Laurens in the Matron
Patrick McCann / racingpost.com/photos
1 of 1
By Richard Forristal and Tony O'Hehir UPDATED 2:46PM, SEP 17 2018

Connections of two of this year's superstar performers, Alpha Centauri and Saxon Warrior, paid glowing tribute on Sunday after both were retired with injuries sustained in finishing runner-up at Leopardstown the day before.

Alpha Centauri has been the standout performer of the European Flat season in 2018, having landed the Irish 1,000 Guineas, Coronation Stakes, Falmouth and Prix Jacques le Marois.

The Niarchos family's filly, trained by Jessica Harrington, started hot favourite to extend her sequence of victories at the top level to five in the Matron Stakes on Saturday but had no answer to Laurens, who made all for a game triumph and beat her by three-quarters of a length.

However, Alpha Centauri hung left and seemed to falter when coming with her run inside the final furlong and was reported to be clinically abnormal after the race. It emerged that she had chipped a joint in her fetlock, and it was decided on Sunday to call time on her terrific career.

Alan Cooper, the Niarchos family's long-serving racing manager, said: "The decision has been made to retire Alpha Centauri. She got a chip in her right front fetlock and following discussions with the vets and with Jessie the decision was made."

Cooper added: "The pleasure she has given us all this year has been fantastic and she was very brave yesterday under far from ideal circumstances. She's been a super mare."

Harrington said: "I've had an amazing summer with her. She gave me my first Classic winner, my first Royal Ascot winner, my first French winner – she's done an awful lot of firsts for me. I can't thank the Niarchos family enough. Now we've got to try and find another.

"It was incredible to have her, and no-one can take away what she's done. For her to sustain the injury she did yesterday – and everyone could see when she did it – and still run on to finish second to another very, very good filly says it all.

"Let's not take anything away from Laurens, but I saw her do it and knew straight away we were in trouble."

Alpha Centauri won six of her ten starts for earnings of £1,254,827 and was partnered in all her races by Colm O'Donoghue, who said: "She's retired as one of the highest-rated fillies of all time [on 124]. She was the leading three-year-old all year. She was an incredible filly. She didn't just beat them, she annihilated them. She broke horses' hearts and she's been immense for my career. It was a privilege to be associated with her.

"Yesterday I'd been happy with my spot and she travelled superb. For me it just a case of peeling her off and letting her down slowly, that she was going to pick up and gather them. She got there and then for some reason took a false step and stalled."

Saxon Warrior was another top performer, winning the Group 1 Racing Post Trophy last year and this season's 2,000 Guineas at Newmarket.

He performed with much credit in five winless starts subsequently, including at Leopardstown on Saturday, when beaten a neck by Roaring Lion in a thrilling Irish Champion Stakes. 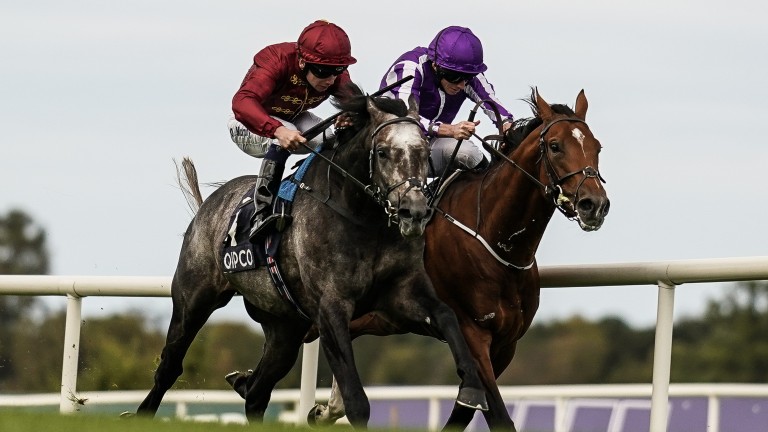 Plans had been drawn up to head to Ascot next month for the Queen Elizabeth II Stakes, but his trainer Aidan O'Brien revealed on Sunday that he had been retired.

He explained: "He was sore when he got home from Leopardstown, so we wrapped him up, and when we took the bandages off this morning there was a lot of swelling to his near-fore tendon.

"Our vet John Halley examined him and after the horse was scanned John told me he had quite a significant core lesion to his flexor tendon.

"After yesterday's race Ryan [Moore] said Saxon Warrior wanted to get on top of the running rail and that isn't like him. Ryan never hit him and to battle the way he did to be beaten only a neck shows how brave a horse he is."

O'Brien added: "It's a big pity that we've had to retire him. He was a brilliant horse and put up his his best performance when winning the 2,000 Guineas.

"We tried him over a mile and a half at Epsom and again in the Irish Derby as we thought Epsom might not have suited him. He went for the Eclipse and ran a smashing race only a week after the Irish Derby.

"He was very sick after Sandown and was just ready to start back in the Juddmonte International. We knew he would come on a lot from York and he did just that at Leopardstown. It's possible a mile was his best trip. He was a very talented racehorse – top class."

The son of Deep Impact won four of his nine starts for the Coolmore partners, for earnings of £1,112,467.

Colreevy impresses on chase debut for red-hot Mullins and Townend Ghaiyyath gets Cartier coronation after being crowned Horse of the Year Racing Post writers to the fore as nominations revealed for annual Derby awards The global go-to man: how Pierre-Charles Boudot exploded on to world stage