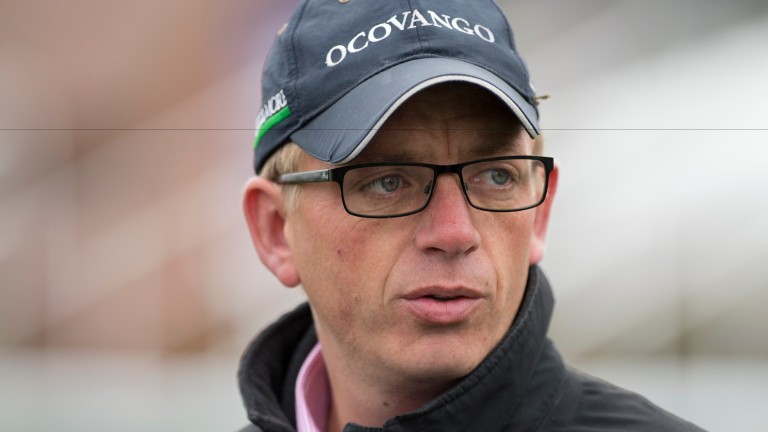 Warren Greatrex: will not risk Aloomomo on the current good ground
Edward Whitaker (racingpost.com/photos)
1 of 1
By Lewis Porteous 1:47PM, DEC 8 2016

Aloomomo, 6-1 joint-favourite with Ladbrokes for Saturday's Caspian Caviar Gold Cup, was on Wednesday looking increasingly likely to miss the race with the current good ground at Cheltenham against the promising six-year-old.

Trainer Warren Greatrex has had the race circled since the start of the season but, with a firm preference for easier ground, Aloomomo could now head to Ascot on Saturday week instead.

"He's far better on soft ground," said Greatrex. "He's in the big race at Ascot [the Listed Lavazza Jolie Silver Cup Handicap Chase] next Saturday and I would say at this present moment, and unless the forecasts have got it wrong, I will probably not run Saturday, hope we get some rain and wait for Ascot."

While declarations for the Grade 3 handicap will be made on Thursday morning, with the going description on the chase course as good, rain is anticipated before Saturday's race, which could bring "some good to soft" into the description on Saturday.

Despite his obvious frustration, Greatrex does not think waiting an extra seven days would disadvantage Aloomomo, who he has high hopes for this season.

He added: "It's a shame but you can't do anything about the weather. If he runs the week after he'd still have a great chance there. He's in seriously good form."

Vic out to retain crown

There is no such worry about the participation of last year's winner Village Vic, who to go one better than when a narrow runner-up in the BetVictor Gold Cup on Cheltenham's Old course last month.

"There's no doubt he will run," confirmed trainer Philip Hobbs. "There would be a little bit of doubt that he's a better horse on softer ground but that's only a possible and it's all gone well since his last run."

Village Vic is a solid 7-1 shot for a repeat win but the horse supported across the board throughout Wednesday was BetVictor fifth Bouvreuil, who now heads the betting with the majority of bookmakers at 6-1.

Bouvreuil will be joined by stablemate Frodon in Saturday's race but not Art Mauresque, according to champion trainer Paul Nicholls.

Watering before the two-day International meeting was set to cease on Wednesday night, with 80mm applied to the chase and hurdle course over the past four weeks and the same to the cross-country.

The going on the chase and hurdle tracks is good and the cross-country course good to firm, firm in places.

Clerk of the course Simon Claisse said on Wednesday: "We're expecting maybe up to 4mm of rain by racing on Friday and then on Saturday we could get 5-6mm throughout the day. So the good ground we currently have come Saturday might well get easier and we might end up with some good to soft in it on Saturday."

Racing switches to the track's New course on Friday, with the only "minor adjustment" from last season being the fourth-last fence, which is portable, moving eight yards away from the winning post following feedback from jockeys last season.

FIRST PUBLISHED 4:31PM, DEC 7 2016
Unless the forecasts are wrong I'll probably not run him on Saturday, hope we get some rain and wait for Ascot