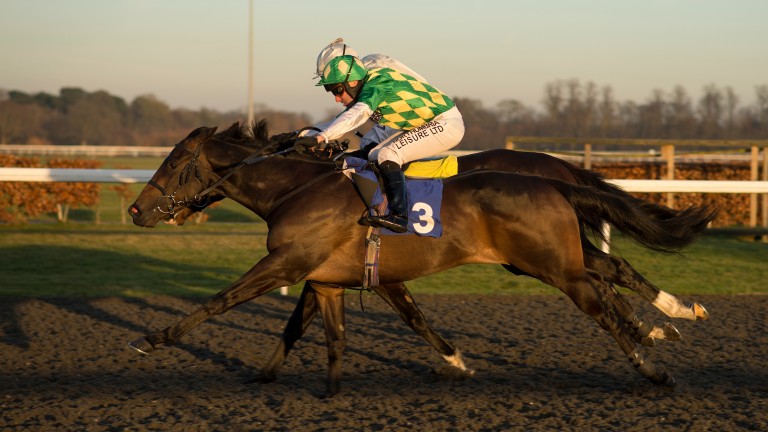 Second Thought bids to maintain his unbeaten record on the all-weather at Kempton today
Edward Whitaker
1 of 1
By Lewis Porteous UPDATED 7:13AM, NOV 23 2017

Wednesday’s three jumps meetings will be history by the the time the runners in the Listed Hyde Stakes (6.40) take centre stage at Kempton’s twilight meeting and the feature race of the day is well worth sticking around for.

Top-rated in the line-up is Stormy Antarctic, once a Classic contender and back to winning ways at this level last time in France. Trained by Ed Walker, he tackles Polytrack for the first time under Jamie Spencer.

The surface is less of a worry for one of his chief rivals, as Second Thought has a perfect four-from-four record on the all-weather and was a winner on finals day back in April.

The afternoon action comes from Hexham, Warwick and Chepstow  with some good horses taking to the track, including Grade 2-winning hurdler Sceau Royal, who makes his third start over fences at Warwick (2.10).

Bristol De Mai is set to start favourite for Saturday's Betfair Chase, a race that has been on his radar ever since he produced one of the most visually stunning performances of last jumps season at the racecourse to which he now returns.

Nicky Henderson reckons title holder Buveur D'Air is exactly where he wants him for his return to action at Newcastle next week but acknowledged the comeback run of big Champion Hurdle rival Faugheen was "frighteningly impressive".

Former Gold Cup hero Coneygree is on track for a run in the Ladbrokes Trophy at Newbury following a schooling session at the course on Tuesday.

Manchester United travel to Basel on Wednesday evening looking to wrap up top spot in Group A of the Champions League. Dan Childs previews the action and offers his betting advice.

Sceau Royal bids to give owners Simon Munir and Isaac Souede a third straight win in the Highflyer/Million In Mind 4-y-o & 5-y-o Novices' Chase at Warwick today, after Top Notch and Bristol De Mai carried their silks to victory in the last two seasons.

Disappointingly, Sceau Royal looks to have scared off his potential rivals and faces just one opponent, with the race again highlighting a worrying trend of small-field novice chases.

With £15,000 in prize-money on offer, the place-money alone is hardly shabby for a race of this nature, just ask Gary Moore who saddles the only other runner San Pedro De Senam.

FIRST PUBLISHED 7:56AM, NOV 22 2017
Second Thought has a perfect four-from-four record on the all-weather and was a winner on finals day back in April