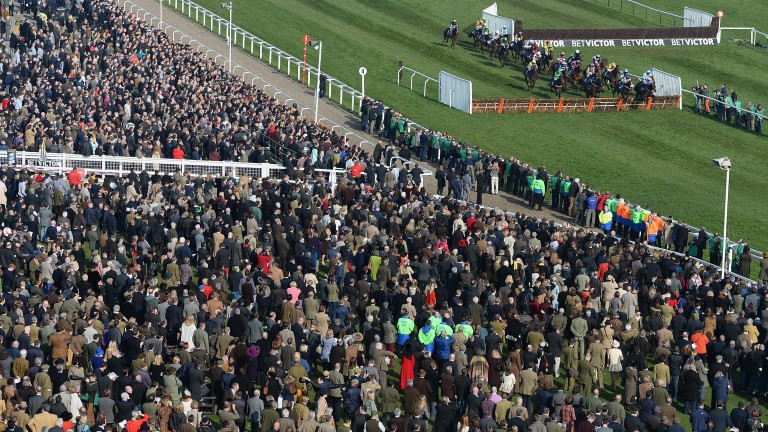 No more sleeps, no more waiting, it's here. After months of build up, this year's Cheltenham Festival finally begins and what an opening day it should be.

A fascinating renewal of the Unibet Champion Hurdle (3.30) is the undisputable highlight of the day and perhaps the entire festival, with defending champion Buveur D'Air trying to become the sixth horse to win the race three times but facing some daunting opposition in Apple's Jade and Laurina.

The meeting kicks off with the Sky Bet Supreme Novices' Hurdle (1.30) and it's a wide open renewal, although Klassical Dream, whose trainer Willie Mullins has a good record in the festival curtain-raiser, has been all the rage since declarations were announced on Sunday.

The Racing Post Arkle (2.10) and OLBG Mares' Hurdle (4.10) are the other Grade 1s on the card. However, it is worth remembering it is not all about Cheltenham as Southwell (Flat), Sedgefield (jumps) and, in the evening, Wolverhampton (Flat) also host meetings.

Cheltenham (first race at: 1.30)
Good to soft, soft in places

Not sure what to back on the opening day of the Cheltenham Festival? Fear not, members can access Pricewise's value picks in two parts. Click here for his Ultima picks, while you can find his Mares' Hurdle, National Hunt Chase and Close Brothers handicap selections here.

Elsewhere, get our experts best picks from Cheltenham and the remaining cards in the daily Tips Box.

If you're not excited enough already, read the opening day's Cheltenham Fever to get you in the mood.

As alluded to earlier, the Champion Hurdle really is the biggest race of the day. Get the lowdown and all the key quotes on the main protagonists here.

The Postcast team have previewed Tuesday's races in great detail and it is well worth a watch.

Champion trainer Nicky Henderson could be set for another fine festival with the likes of Buveur D'Air, Altior, Champ and Santini among his Cheltenham squad. The Seven Barrows leader has been discussing the highs and lows of being a racehorse trainer.

Away from Cheltenham, the Champions League last 16 continues, with Manchester City carrying a slender lead into their second leg tie at home to Schalke. Read Mark Langdon's preview here.

After photo-finish controversy, the equine flu scare and prize-money rows, it would be lovely to see the Cheltenham Festival go by without controversy, with the focus hopefully on magnificent training feats, stunning rides, sublime performances and thrilling races. Good luck to all participants, equine and human, and let's hope for the safe return of all.

FIRST PUBLISHED 8:47AM, MAR 12 2019
A fascinating renewal of the Unibet Champion Hurdle is the undisputable highlight of the day

Are the opposition running scared of Bob Olinger? Four Turners talking points Will Gordon Elliott dominate again? Four National Hunt Chase takeaways Champ given Cleeve Hurdle prep as Stayers' emerges as 'probable' festival target Arkle, Brown Advisory and more: potential runners plus a 25-1 long-range shout It will be the roar of all roars - and now we have a Supreme worthy of it Meet the miracle workers with just four horses but eyes on the biggest prizes