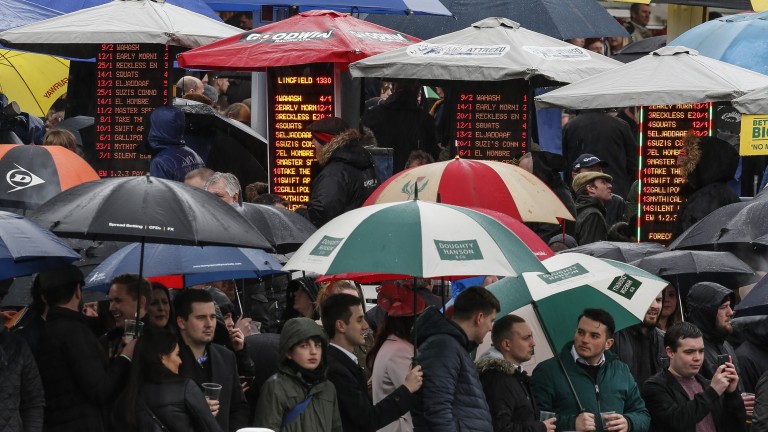 Umbrellas up: that's the trend as the wet spring continues to haunt racing
Alan Crowhurst
1 of 1
UPDATED 9:24AM, APR 4 2018

'Rain, rain go away' is the plaintive chant from racecourse officials as their turf tracks have been submerged by the biblical downpours of recent days.

Leopardstown failed to pass an 8.30am inspection, with parts of the track left unraceable following overnight rain. That means the all-weather trinity of Lingfield, Southwell and Kempton keeps the show on the road today.

Frankie Dettori can brighten proceedings at Lingfield where he has three rides with two for trainer John Gosden at the start of a season where the partnership could hog the headlines with Cracksman and Enable.

It is only eight days to the start of Aintree's Grand National meeting where the Canal Turn could take on a whole new meaning if this weather sticks around.

Pietro Innocenzi (£) heads the tipping team for website members and there are plenty of selections in the Tips Box. Signpost Sweetspots points the way to another three interesting stats.

Maddy Playle has the latest 10-second tip in the video below.

There's serious inflation at York with this year's Ebor worth £500,000 but sponsors Sky Bet making it worth double that next year.

There is no let-up in the unmissable trainers' stable tours for website members. After Roger Charlton, Richard Hannon, Charlie Appleby, Clive Cox and Joseph O'Brien it is Andrew Balding's powerful Park House stable in Kingsclere who is put in the spotlight by Steve Dennis.

You think it is wet where you are? Take a look at what trainer Ruth Carr is having to battle to keep her show on the road in Yorkshire as James Burn drops in.

Newmarket has not escaped the rain so trainer Hugo Palmer took some of his horses to work around Chelmsford's all-weather and our Newmarket correspondent David Milnes was there to catch the action.

Catch up with the Postcast review of all the Easter action and a look forward to Naas this weekend.

It's Champions League week and the humdinger that is Liverpool v Manchester City for a place in the semi-finals. Tonight's first leg at Anfield is assessed by Steve Davies, who expects fireworks.

Not to be missed is Steve Palmer, who has gone all-American with his tips for the Masters at Augusta which starts on Thursday.

Better still go out and buy the Racing Post for the 28-page Masters preview.

What with all the doubts about turf racing for the rest of the week, why not take a look at Kempton on Saturday where bookmakers have priced up the two big races already.

FIRST PUBLISHED 8:02AM, APR 4 2018
Frankie Dettori can brighten proceedings at Lingfield where he has three rides with two for trainer John Gosden