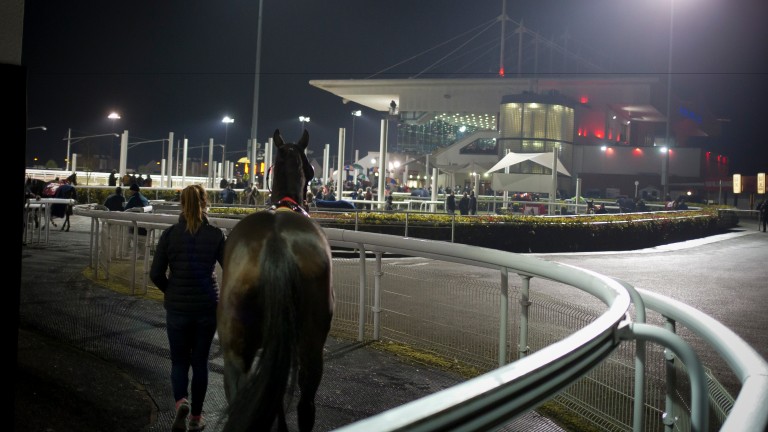 Horses parade under the lights at Dundalk Stadium
Patrick McCann
1 of 1
By David Jennings 6:45PM, JAN 3 2017

Ireland's only all-weather racecourse continues to grow in popularity as crowds at Dundalk increased by 3.5 per cent in 2016, with more than 52,500 people attending the 39 fixtures at the floodlit venue.

There are 198 entries for Dundalk's first fixture of 2017 on Friday night, and racecourse manager Jim Martin believes all-weather racing in Ireland is going from strength to strength. This is supported by entries in 2016 being up 22 per cent on the previous year.

I was delighted with 2016 as a whole," said Martin. "Attendances were up three and a half per cent - we had over 52,500 people come through the turnstiles during the year, with our best attended meeting being the one we held on July 12. We also got a big crowd for our Sunday fixture on August 14. We had crowds of around 3,500 for both of those, which was great."

Martin was also pleased to see high-class horses turning up at Dundalk in 2016.

"You always like to see quality horses running here and the fact that Caravaggio made a winning debut at Dundalk last April will hopefully have a positive effect," he said.

"He went on to win the Coventry at Royal Ascot and looks so exciting. Irish Oaks winner Seventh Heaven won here as well last year, and so did Peace Envoy. We seem to be able to attract a better quality of horse than we did in the past and long may that continue. It is always nice to see subsequent Group 1 winners coming here first."

He added: "It's also great to see so many up-and-coming trainers cutting their teeth at Dundalk. They get great opportunities here."

Dundalk played host to the final fixture in Ireland before Christmas, when staging an eight-race card on December 23, and will host a two-day meeting on Thursday, December 21 and Friday, December 22 this year.

"We had a nice crowd on December 23 but it was probably a little too close to the big day," said Martin. "I think the two meetings on December 21 and December 22 will work better this year as it's that extra day or two before Christmas.

"Our hospitality packages were completely booked out for the month of December in 2016 and it continues to be a very popular venue for Christmas parties."

He added: "We're always looking to improve things and have filed an application for grant aid for a new owners' and trainers' facility near the parade ring, as well as upgrading our television screens throughout the track."

FIRST PUBLISHED 6:45PM, JAN 3 2017
Attendances were up three and a half per cent - we had over 52,500 people come through the turnstiles during the year