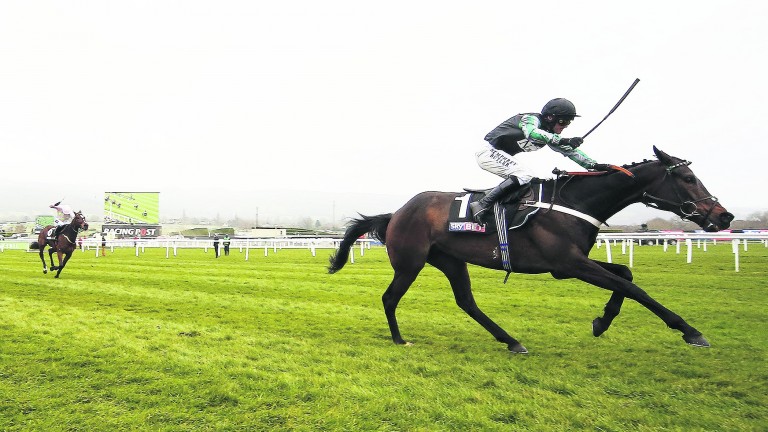 With the Cheltenham Festival looming, a host of big guns were fired at Newbury and elsewhere on a day when the temperatures were freezing but the action was red hot. Here is how a fantastic afternoon of action unfolded.

1.35
There is a mover in the Sky Bet Supreme Novices' Hurdle market as High Bridge extends his winning run to three with a win in Newbury's Read Paul Nicholls Exclusively At Betfair Novices' Hurdle. Betway shorten the Ben Pauling-trained six-year-old from 25-1 to a general 14-1.

1.50
The remarkable Tobefair wins again! It is now seven in a row for the seven-year-old as he battles back in the most likeable fashion after being headed late on by Morello Royale to win the Betfair Cash Out Handicap Hurdle at Newbury. Trainer Debra Hamer's Cheltenham Festival dream looks like it is going to come true.

2.10
Richard Johnson goes down with the flu and so Aidan Coleman is handed the not insignificant task of partnering Native River in the Betfair Denman Chase. No pressure, Aidan.

2.30 NO JOHNSON, NO PROBLEM
Native River is off to the Timico Cheltenham Gold Cup with an outstanding shot at glory after a fine victory in the Grade 2 Betfair Denman Chase at 11-10. Bristol De Mai, who went off the 10-11 favourite after late money, was soundly beaten, with Le Mercury running a big race in second. You will get no bigger than 9-2 for Native River in the Gold Cup markets now.

2.45
Willy Twiston-Davies must be wishing ITV could cover the racing every day - it's another big televised winner for him as Flying Angel comes out on top in the Grade 2 Betway Kingmaker Novices' Chase at Warwick.

3.05 FAR TOO GOOD
Altior steps out of novice company and pulverises his four rivals in the Grade 2 Betfair Exchange Chase at Newbury. A former Champion Chase winner was among those toiling in behind as Altior jumped spectacularly to ensure he heads to Cheltenham unbeaten over fences, following the same path as Sprinter Sacre - and comparisons between between the two sound increasingly less and less silly. At 1-3 favourite, the Racing Post Arkle is his for the taking.

3.40 BETFAIR TO BALLYANDY
Ballyandy, ridden by Sam Twiston-Davies and trained by his father Nigel, wins the Grade 3 Betfair Hurdle at 3-1 as he gets the better of a brilliant battle with fellow leading hopeful Movewiththetimes, who returns at 6-1. Clyne takes third, also at 6-1, and Song Light fills fourth spot at 14-1.

3.50
Where to at the Cheltenham Festival for Ballyandy? Paddy Power cut him to 8-1 from 16-1 for both the Sky Bet Supreme Novices' Hurdle and the Neptune Novices' Hurdle - Sam Twiston-Davies tells reporters he would favour the latter.

4.50
Nicky Henderson completes a Newbury double as Daphne Du Clos wins the bumper at 15-8 under Sean Bowen, who earlier in the day rode a winner at Warwick. Bet365 make Daphne Du Clos a 7-1 shot for the Champion Bumper but you can get 12-1 with BetVictor.

4.55
Over at Meydan, Thunder Snow runs out a commanding winner of the UAE 2,000 Guineas under Christophe Soumillon for trainer Saeed bin Suroor and Godolphin.

5.05
Carter McKay could hardly be more impressive as he canters away with the concluding bumper at Naas for Willie Mullins. William Hill remain a stand-out 8-1 for the Champion Bumper but Coral go 7-2 about the exciting prospect.

Altior was obviously sensational but to these eyes, a gutsy staying chaser blessed with a touch of class is what the game is all about. It is fitting then that in a race named after the ultimate example of that in Denman, Native River further advertised his Gold Cup credentials with an excellent win. With Thistlecrack's reputation dented, he could well be said to be the one to beat in the Cheltenham showpiece.