Punchestown given the green light despite fears over high winds 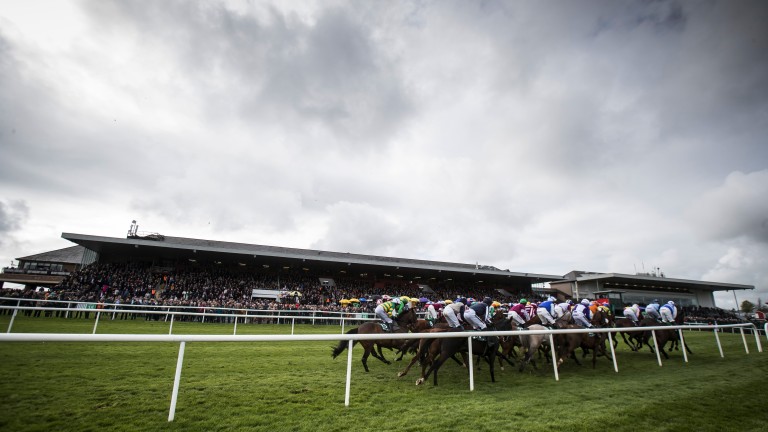 Punchestown: course will have to cope with strong winds on Wednesday
Patrick McCann (racingpost.com/photos)
1 of 1
By James Stevens UPDATED 12:33PM, NOV 28 2018

High winds had caused some concern but racing will go ahead at Punchestown on Wednesday.

Clerk of the course Paddy Graffin gave the meeting the green light shortly after 11am. Two hurdles in the back straight will be omitted due to the wind.

Earlier on Wednesday morning the course tweeted: "The going ahead of today's meeting is good following 4mm of rain since yesterday morning. Strong winds forecast and situation being monitored. Currently racing still goes ahead."

It could be a big afternoon for Gigginstown who send 11 runners to Punchestown, including plenty of hot prospects. The star of their fleet is chasing debutant Mengli Khan (1.55), who finished third in the Supreme Novices' Hurdle and is a general 12-1 shot for the Racing Post Arkle.

The maroon and white silks will also be carried by Daly Tiger, Alighted and Acronym in the maiden hurdle (12.25) while Judgement Day and Poli Roi line up in a competitive novice chase (2.30). Battleoverdoyen, who cost £235,000, makes his debut under rules in the bumper (3.35).

Jump racing in Britain is staged at Wetherby and Hereford, meanwhile Flat fans can look forward to seeing Ophelia's Dream, a sister to Group 1 heroine Wuheida, make her debut in a competitive novice stakes (2.15) at Wolverhampton.

Pietro Innocenzi casts his eye over Wednesday's card and you can read his best bets of the day here and see the verdict of our team of regional experts in the daily Tips Box.

Read Amy Murphy's plans for her star novice chaser Kalashnikov here, while you can read about Supreme third Mengli Khan's return to action.

The PDC World Darts Championship is approaching and you can read an update on the first round draw from Steve Davies here.

It's a big night for Liverpool and Spurs in the Champions League. Read big-match previews and find out the best bets.

A Listed winner on the Flat, Lord Yeats is an interesting recruit to hurdles and he makes his debut over obstacles for Jedd O'Keeffe in the 1.15 at Wetherby.

FIRST PUBLISHED 7:50AM, NOV 28 2018
It could be a big afternoon for Gigginstown who send 11 runners to Punchestown