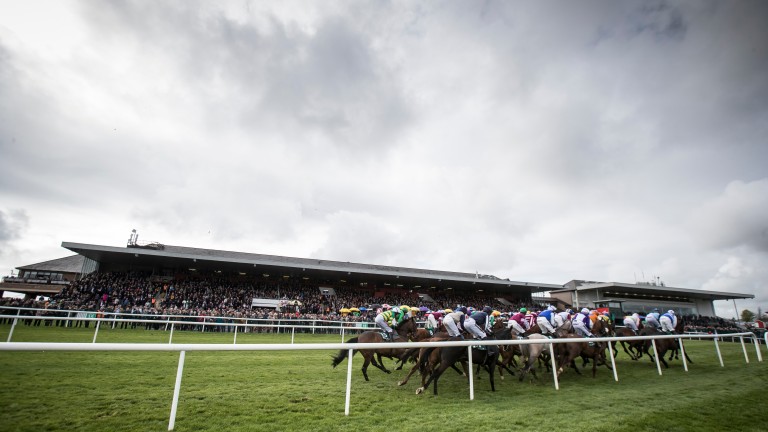 Surely today's six meetings – evenly split between the codes – will not produce as much drama as that served up at Punchestown on Tuesday.

After those unbelievable events at Punchestown the little matter of an Investec Derby trial at Epsom will be a mere distraction from the second day of the festival and another three Grade 1s.

After The Storyteller's narrative can there possibly be any twists and turns left in the title duel between Willie Mullins and Gordon Elliott?

Hopefully the first day of the Perth festival will pass off without incident along with Taunton's evening meeting, with just three days left to the jumps season.

Catterick and all-weather Lingfield back up Epsom for Flat followers.

Pietro Innocenzi (£) heads the tipping team with strong support from our other experts in the Tips Box and Signposts Sweetspots.

If you are zeroed in on Punchestown the What's The Word preview below of day two with the Grade 1 Coral Punchestown Gold Cup and Racing Post bumper should not be missed.

For those in a hurry click below for the popular ten-second tip.

For those who need something more than the six meetings in Britain and Ireland there is Hong Kong action from lunchtime onwards in Britain.

The Punchestown festival got off to an explosive start and Lee Mottershead tries to find answers to what happened in the Champion Novice Chase.

The Postcast team with all things Ireland is hosted by Lee Mottershead at Punchestown aided and abetted by Richard Forristal, David Jennings and Tom Nugent.

If you need a reminder of the dramatic first day check this out:

Steve Palmer has his take on the Zurich Classic, which features the top players pairing up to give a whiff of the upcoming Ryder Cup in September.

Adrian Humphries has his unmissable tips for the latest matches in the Betfred World Snooker Championship at The Crucible in Sheffield.

John Gosden's Crossed Baton is a strong favourite for the Investec Derby trial but Mark Johnston, whose Permian was touched off by Cracksman in last year's thriller, is seeking revenge with Dee Ex Bee. Throw into the mix two Aidan O'Brien scouts and thoughts are definitely turning to the Classics.

FIRST PUBLISHED 7:33AM, APR 25 2018
Hopefully the first day of the Perth festival will pass off without incident