Saturday Action NAAS WHAT TO WATCH OUT FOR 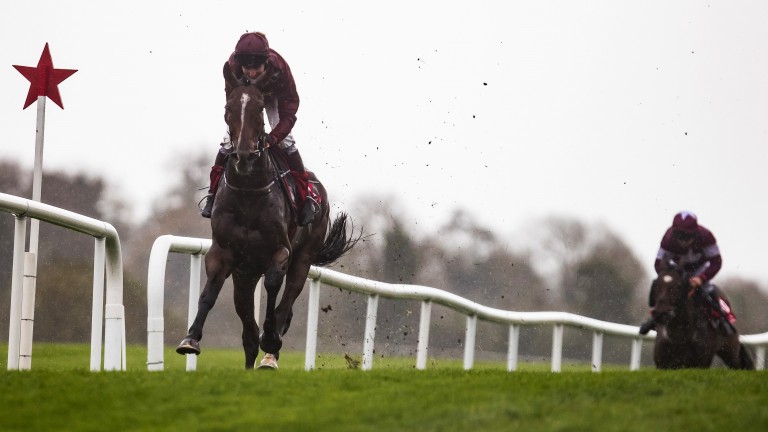 Pallasator, a winner at Group 2 and Group 3 level for Sir Mark Prescott, tackles hurdles for the first time in the 2m3f maiden (1.45), with trainer Gordon Elliott hoping the quirky stayer will be on his best behaviour.

The giant, characterful eight-year-old won a charity race on the Flat at Punchestown last month when ridden by Norman Williamson, and Keith Donoghue will be on board here, with the 2015 Doncaster Cup winner set to face 11 rivals.

Elliott said: "Keith does a lot with Pallasator at home and has got to know him well. Everything is fine with the horse and he's been behaving himself, so hopefully it will be the same story. He's been schooling well."

Gordon Elliott's Ball D'Arc has to concede weight to his five rivals in the Grade 3 Poplar Square Chase (12.35) owing to a 9lb penalty for two wins at the same level last season.

Ball D'Arc was third behind Disko on his reappearance a week ago, and Elliott said: "He ran well at Down Royal, but this is a good race and I'd say Ordinary World will be difficult to beat.

"Our fellow is well, but it won't be easy having to give weight away."

The trainer said: "His form last season was good and he's in great order for his return. We're hoping he can improve on last season's form."

Can Bacardys jump to it?

A dual Grade 1 winner as a novice hurdler last season, Bacardys starts off over fences in the 2m3f beginners' chase (3.30), in which his rivals include fellow chasing first-timer Snow Falcon, a dual Grade 2-winning hurdler, and De Plotting Shed.

Winner of the Deloitte Hurdle at Leopardstown and the 2m4f Champion Novice Hurdle at Punchestown, in which he pipped Finian's Oscar in a photo, six-year-old Bacardys was in effect knocked out by a faller in the Neptune at the Cheltenham Festival.

Bacardys: could revert to hurdling in the Grade 2 Galmoy Hurdle at Gowran Park
Alain Barr

Trainer Willie Mullins said: "Bacardys won a point-to-point before we got him. He did well in bumpers and novice hurdles and we're looking forward to getting him started over fences. His schooling has gone well."

De Plotting Shed has the advantage of a previous run over fences, having finished second to Presenting Percy at Galway last month.

His trainer Gordon Elliott said: "It was a good run at Galway but this looks another good race. Hopefully his little bit of experience will help his chance."

Will Delta prove a force again?

The Gordon Elliott-trained pair Delta Work and Duca De Thaix, who will be having his debut run for the trainer on his first start for 392 days, go in the Grade 3 Fishery Lane Hurdle (1.10).

Their five rivals include the Mullins-trained filly Meri Devie, who was placed at Grade 1 level as a juvenile last season.

Elliott said: "Delta Work won his maiden hurdle at Punchestown by 20 lengths. He's well and just ready to start. Hopefully, he'll run well but I'd expect him to come on a good bit for the run.

"Duca De Thaix is a very nice sort who won a hurdle race in France. He's well but hasn't run for over a year."

FIRST PUBLISHED 6:00PM, NOV 10 2017
Everything is fine with the horse and he's been behaving himself, so hopefully it will be the same story. He's been schooling well