All eyes on unbeaten Monbeg Worldwide on big day for Elliott 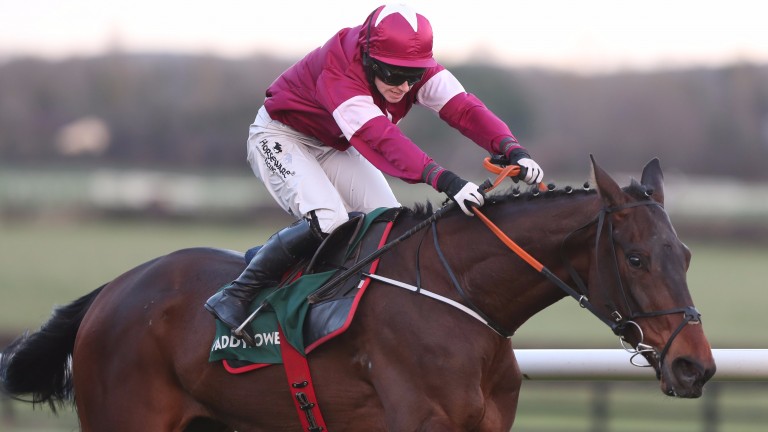 Monbeg Worldwide looks to retain his unbeaten form in the maiden hurdle at Fairyhouse on Tuesday
Patrick McCann
1 of 1
By Mark Boylan 6:00PM, NOV 6 2017

Fresh from a pair of trebles at Down Royal's Champion Chase two-day fixture, Gordon Elliott looks set to wage war on his rivals at Fairyhouse on Tuesday, when he unleashes the strapping Monbeg Worldwide for the first time this season.

Gigginstown's three-time bumper winner bids to maintain his unbeaten record and will surely be a short price to do so in the 2m4f maiden hurdle (1.25).

Elliott said of his 33-1 shot for the Ballymore and Albert Bartlett Novices' Hurdles: "He's in good form and like plenty of ours he'll come forward from his first run. We're looking forward to running him. Chasing will be his game in time."

The Storyteller was touted as one of the leading Irish handicap hopes at last season's Cheltenham Festival but injury curtailed his campaign before the Martin Pipe Handicap Hurdle.

However, Elliott is happy with him ahead of the conditions hurdle (1.55), before he commences a chasing career.

"The Storyteller will probably go chasing after this run but we're happy with him and looking forward to starting him off," he said.

The Gold Cup-winning trainer has seven runners on the card and is also represented by the five-timer-seeking Poormans Hill in the 2m5f handicap chase (2.25), who returns quickly following a Down Royal victory three days ago.

Elliott said: "Poormans Hill has got the 4lb penalty to contend with but we thought we'd let him take his chance."

FIRST PUBLISHED 6:00PM, NOV 6 2017
He's in good form and like plenty of ours he'll come forward from his first run. We're looking forward to running him. Chasing will be his game