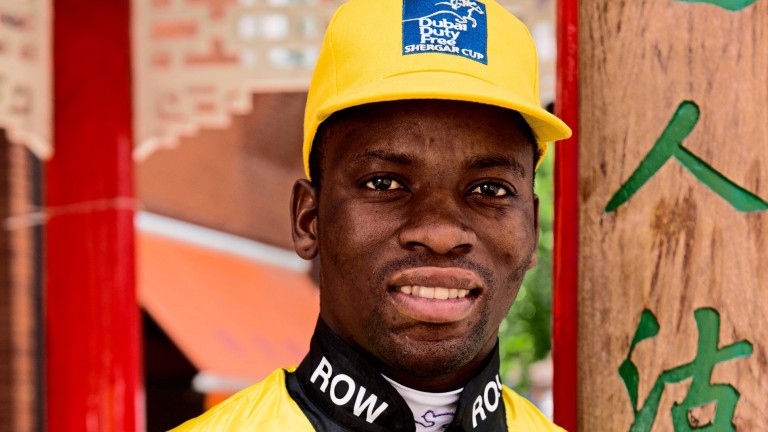 Carry On Alice (Sean Tarry/S’Manga Khumalo), winner in 2015 and fifth when odds-on 12 months ago, bows out here and is to be shipped to Australia to take up broodmare duties there.

She again heads the market after taking a creditable third to Rafeef in the Computaform Sprint. This is not such a stiff task and Tarry said on his website: "In the week leading up to Champions Day we had some temperatures and weak blood pictures, and she may have been affected. This may not be a fairytale ending but she goes into the race in good form."

Just Sensual (Joey Ramsden/Anton Marcus) came with a late run to get up close home in the mile Cape Fillies Guineas and has since won over a furlong shorter. She is joint-second favourite but there must be a doubt as to whether she is fast enough to beat the best over this distance. Also she is drawn on the outside whereas the ground here is normally fastest on the inside. A false rail was erected last weekend to preserve the ground on the inside which, as a result, is expected to be even more favoured than usual.

Live Life (Candice Bass-Robinson/Greg Cheyne) has become a formidable force in sprints and may prove the biggest threat to a winning swansong for Carry On Alice.

Last year's winner Real Princess (Dean Kannemeyer/Anthony Delpech) has been disappointing in recent starts and, while Bela-Bela (Justin Snaith/Bernard Fayd’Herbe) has the class, she would probably prefer further.

Green Plains (Sean Tarry/S’Manga Khumalo) will put the draw to the test when starting from stall 11 here. She is favourite after taking the Grade 2 SA Fillies Nursery over a slightly shorter trip at Turffontein three weeks ago.

Call To Account (Joey Ramsden/Piere Strydom) ran well here at the beginning of the month after scoring at Kenilworth and comes from a stable that seems particularly strong in the juvenile department this season. Course winner Neptune’s Rain (Duncan Howells/Keagan de Milo) is also expected to go well.

Naafer (Mike de Kock/Anthony Delpech) opened up favourite after beating all except exceptional stablemate Mustaqeem in the Grade 1 SA Nursery over a marginally shorter trip at Turffontein three weeks ago but the dogs have been barking about Sand And Sea (Dennis Drier/Anton Marcus), a son of Twice Over who made a winning debut over course and distance this month. Drier, who has won five of the last seven runnings, said: "He is a nice colt and has done nothing wrong. I don’t know how good the others are but we are expecting a big run."

There has also been support for once-raced Vaal winner Keanan’s Rock (Sean Tarry/S’Manga Khumalo) and Kenilworth scorer Al Mariachi (Brett Crawford/ Corne Orffer) who was second over this course and distance early in the month.

This is the richest race at the Festival Of Speed meeting and Talktothestars (Coenie de Beer/ Chase Maujean) bids to become the first horse to win in successive years since Jet Master at the turn of the century and he again shoulders top weight. But he is well drawn in five and his trainer said: "Talktothestars doesn’t take a lot of work. He knows what to do and he conditions himself."

The massive Brutal Force (Joey Ramsden/Piere Strydom) was less than half a length behind second-placed Talktothestars in the Computaform Sprint and is half a kilo better. Stablemates Attenborough (Anton Marcus) and Table Bay (Anthony Delpech) represent the Classic generation and three-year-olds have a good record, winning eight of the last 12 runnings.

Sergeant Hardy (Justin Snaith/Greg Cheyne) has a breathing problem and Snaith said: "This is a big ask for a three-year-old carrying 57k (9st) but he has come on a lot from his last run and has been better at home since."