Alex De Larredya too strong for Ptit Zig and Aubusson 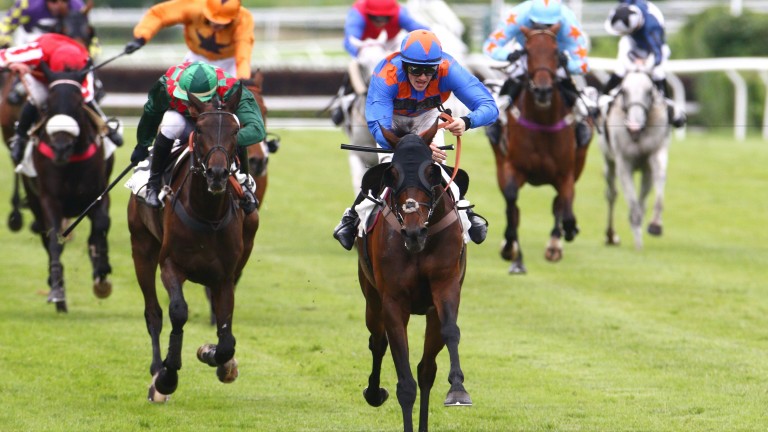 Alex De Larredya capped a great day for owner Simon Munir when sprinting away from Solway and Ptit Zig under a well-timed challenge from Gaetan Masure.

Munir and co-owner Isaac Souede had already seen their colours carried to success by the hugely promising Edward D'Argent in the Grade 2 Prix Congress Chase, as well as receiving news of Sceau Royal's victory in the Elite Hurdle at Wincanton.

"Gaetan rode him really well and the race worked out just as we had imagined it," said winning trainer Francois Nicolle. "He waited in behind for a long time and, while I was worried he might go too soon, he timed it perfectly. This has always been a good horse and he won around here over fences but over hurdles he has just got better and better."

Ptit Zig found himself isolated in second for much of the race – clear of the main pack but up to 20 lengths behind the trailblazing Blue Dragon – but stayed on well to finish third.

Nick Scholfield said: "He has run his heart out and given his all. We chased Blue Dragon for a long way and he has kept galloping. It’s nice to pick up some valuable prize-money."

Aubusson ran a fine comeback to be fourth under Lizzie Kelly, who said: "On Racing Post Ratings we were supposed to come fifth and we have got a bit closer to Ptit Zig than in June. He has run absolutely great and hopefully he will have a good season chasing."

Under first-time partner James Reveley, Blue Dragon cut out tamely after his exertions on the first circuit.

"He never breathed and never jumped, it was a complete non-race, so I don’t know what the excuse is really," said Reveley.

FIRST PUBLISHED 5:54PM, NOV 5 2016
This has always been a good horse and he won around here over fences but over hurdles he has just got better and better