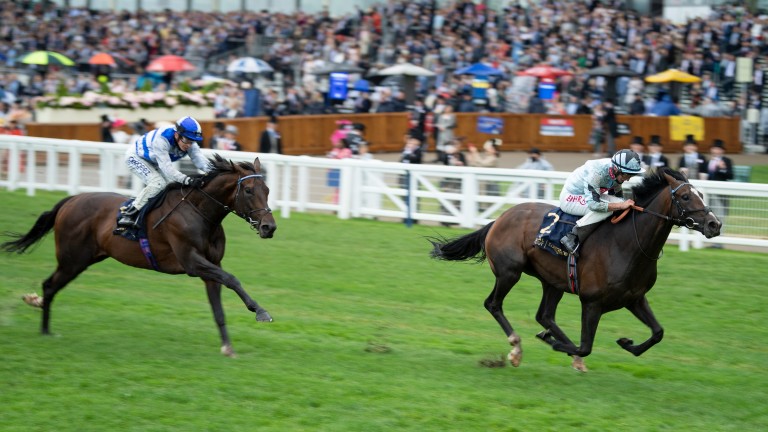 The Prix de l'Arc de Triomphe is the ultimate aim for the owners of impressive Royal Ascot winner Alenquer, although another trip to Paris is the more immediate target.

The three-year-old has been the toast of Kuwait since his length-and-a-half success in the Group 2 King Edward VII Stakes at the royal meeting, although his owners Mubarak Alarou and Mussad Almutari (together as M M Stables) were unable to travel over to see the William Haggas-trained colt account for Tasman Bay.

Connections are still wondering what might have been for their French-bred, as prior to Ascot he had accounted for subsequent Derby winner Adayar in the Group 3 Classic Trial at Sandown, with fourth Lone Eagle giving that form another strong boost when a desperate second in Saturday's Irish Derby.

The son of Adlerflug was forced to miss the Epsom Classic after suffering a setback prior to an intended warm-up in the Dante Stakes at York in May.

Although the Arc in October is the long-term plan, another trip to the French capital for the Grand Prix de Paris at Longchamp on July 14 is under consideration providing travel restrictions do not provide an insurmountable obstacle.

Armando Duarte, representing the owners, said: “We’re still on cloud nine after Royal Ascot and it looks like Alenquer could go to France for the Grand Prix de Paris next providing the restrictions aren’t too difficult over there.

"If that proves too tricky then we could divert to the King George VI and Queen Elizabeth Stakes at Ascot, although he would then be facing four-year-olds which could be quite hard.

"The long-term plan would be the Prix de l’Arc de Triomphe at the end of the year when hopefully the owners will be able to come over.”

Alenquer is a general 12-1 chance for the King George and a 33-1 shot for the Arc. Reflecting on his Royal Ascot triumph, Duarte added: “The ground was so heavy at Ascot that we were afraid to run him really but we took a chance and it paid off. I know everyone says he’s from a German family and should handle those conditions but I think he’ll be better on good ground.”

On how Alenquer would have fared in the Derby had he turned up, Duarte said: “That's the million dollar question but on the form of his Sandown run you’d have to think he would have been thereabouts in the Derby.

"I know Adayar improved massively after that but Alenquer would have improved as well as he was not a hundred per cent fit at Sandown.“

FIRST PUBLISHED 1:35PM, JUN 29 2021
That’s the one million dollar question but on the form of his Sandown run you’d have to think he would have been thereabouts in the Derby