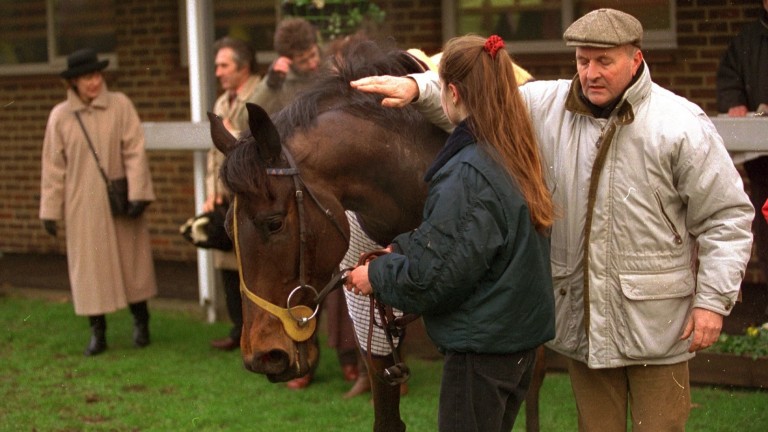 Trying to relive one of the greatest coups in racing history isn't easy when the majority of those involved hadn't the foggiest idea they were in on it.

Such was the wall of secrecy behind which Albert Davison operated, when the money was down very few knew about it. Davison had one of the most sagacious minds of his or any other generation and quickly grasped that the key to landing a string of successful and significant gambles was privacy – even if that meant employees and owners alike were left in the dark.

One man on the inside of this cloak and dagger operation was Taffy Maiden, one of the few people Davison genuinely trusted and who worked with the trainer for 16 years from 1968.

"He was a very clever man and very good with horses with bad legs," recalls Maiden. "He had the patience of a saint and if he thought one had the ability to win he'd wait two years to make sure the legs were right. I was one of only two people who ever rode fast work.

"You'd have your main bunch come out but if he wanted to work one properly he'd always make a bit of a story up. One of his favourites was the cows had broken out and he'd send the other lads round the forest to look for them. That's when he'd say, 'Put your tack on that one and don't say anything to the others'.

"Usually, if he was going to land a gamble, not many would see the last gallop. He played his cards very close to his chest."

Under no circumstances would jockeys be allowed to ride work and he'd avoid journalists at all costs, refusing to give interviews. He even refused to list his string in the annual Horses in Training publication, unless absolutely forced to by regulation.

Davison would rather the racing public knew nothing about his operation in Caterham, Surrey and he largely succeeded, although the extent of some of his gambles – however well disguised – gave him a notoriety among bookmakers. As a consequence, Davison's legacy lives on through the countless tales of some audacious plots. He would often target selling or claiming hurdle races and was especially fond of running two horses on one day, combining both in an each-way double.

Davison left no stone unturned and ensured the odds were heavily stacked in his favour when the money was down. Former rider Ray Goldstein was one of a number of jockeys Davison used and his memory of one of those gambles highlights how meticulous he was.

The strategy Land a hefty off-course gamble on the yard's second string – a horse with a history of leg problems and poor form. All bets will be placed in Ireland so as not to affect the on-course price and ensure a bumper starting price is returned

Goldstein remembers: "There was a big gamble on one I rode. He was very keen that I jumped the hurdles on the wide outside, cut the corners on the bends then get back to the outside to jump again. The horse bolted up having been backed from 33-1 to 8-1.

"When I got back in I said, 'Why did you want me to do that?' It turned out he'd gone round early that morning and flattened the hurdles by the outside wings, then just laid them back up resting on the next hurdle along. So if I had touched one it would have just flipped down. He'd take no chances."

Davison was also adept at spotting a loophole in the rules and in the days before the enforced declaration of jockeys his horses would often appear in the racing press with no jockey declared. On one occasion Davison's horse in a Folkestone seller was down to be ridden by an unknown 7lb apprentice. Minutes before the race it was announced the horse would actually be ridden by Lester Piggott, under whom the horse duly landed a gamble.

'Don't bother coming back if you get beat'

Regardless, it appears to be common knowledge that his biggest single win came at Leicester in 1978. Davison entered two runners in the two-mile conditional riders' Christmas Opportunity Selling Handicap Hurdle on December 18, and unsurprisingly neither was declared with a jockey.

The better fancied of the two was Minigold, a Plumpton specialist lurking towards the foot of the weights. His apparent second string was the five-year-old Great Things, a mudlark with a history of leg problems, whose form figures read 00/0-PP0. His latest unplaced effort came in a Plumpton seller six days previously.

On the eve of the race Davison contacted Josh Gifford to inquire if he had two conditional jockeys available to ride. Gifford, unaware of the plan being hatched by Davison, put forward Richard Rowe and Chris Kinane and Davison agreed to use them, although which horse they would partner was not disclosed.

Rowe, now a successful trainer, picks up the story. He says: "The first time I met Albert was when he appeared in the weighing room door way. He spots me, makes eye contact then beckons me over. So I walk over and he says, 'How many winners have you ridden?' 'Nine sir'.

"Then he asks me how many Chris has ridden. 'I think four sir'. He says, 'Right, you ride Great Things and tell that other lad he can ride Minigold'.

"I looked in the paper at Great Things' form and thought bloody hell, all the way up to Leicester for this. Anyway, me and Chris walkout to ride and there's no trainer, no horse, nobody in the paddock to meet us.

"Then, right at the very last minute, as the bell goes to mount, these two horses turn up but still no Albert Davison. Literally as we're walking on to the track Albert appears through a crowd of people, grabs my leg and says, 'Don't bother coming back if you get beat'.

"So off to the start we go and a really thick fog starts coming down. I say to Chris, 'What did he say to you?' Chris replies, 'Go as fast as you can for as long as you can'.

"The tapes went up and the fog is getting worse. Chris went out fast so I couldn't see him and the rest chased after him. Halfway down the back I'm all on my own. I've not a clue if I'm fifth, tenth or where I am. I'm totally off the bridle and I'm thinking, 'Bloody hell, he told me not to come back if I get beat'.

"So I'm pushing and pushing, never see another horse all the way round the home turn and then, when I come into the straight, I started finding some tail-enders. As soon as I started picking them off the horse started to get a bit more enthusiastic. I passed horse after horse and going down to the last there's just three in front of me.

"I jumped the last and just managed to get by the three of them. I wasn't really sure if I'd won but it turned out that I had. He was very straight-faced after – no jumping about or anything like that, just very professional and a well done and I'll use you again and that was it. I had no idea about any gamble at that stage."

'We took the chance and had a go at Leicester'

The significance of the victory didn't become apparent until several days later, when a number of bookmakers in Ireland reported huge losses on winning bets settled at starting price. Because Great Things was friendless on-course his price remained at 33-1, and in the space of 15 minutes before the off a string of bets, believed to have totalled close to £3,000, was placed in Irish betting shops where the money would have no impact on the on-course price.

The combined liability of these bets was almost £100,000-£500,000 in today's money. The coup was first reported in the Sporting Life on December 22, 1978, although at that stage Davison proclaimed his innocence, saying: "I had £25 each-way on him and my other runner Minigold. If anyone else had money on the winner, that's up to them."

However, with some bookmakers refusing to pay out, Davison broke his silence the following month and in a rare interview in the Sunday People he revealed all, saying of Great Things: "He reached the point where he would have broken down at home, so we took the chance and had a go at Leicester, though it was all last-minute stuff.

"Late in the morning, with the frost still not out of the ground, we thought my other runner Minigold would win. Happily it thawed swiftly, the ground changed to the soft going Great Things must have, and we decided it was all systems go.

"I went into the ring and made a show of backing my other horse Minigold to make people think he was the one we fancied. We were hoping to get 20-1 about Great Things off course, so 33-1 was a bit of a bonus. Mind you, we were all dying a death when Minigold still led at the second-last but he faltered on the soft ground and Great Things came through to win despite finishing lame."

Over the next 20 years Davison landed his fair share of gambles but his career was always shadowed by controversy and he eventually gave up his licence in 1993 after he was discovered to be using his land as an unofficial dumping ground for building waste.

In 1998 he was warned off for six years by the Jockey Club for his part in the victory of Will I Fly at Leicester in November 1994. He was found guilty of conspiring to defraud the betting public after the horse, nominally in the care of Wiltshire trainer Anne Jermy, had been found to have been stabled at Davison's Tilling Down Farm in the care of trainer Monica Long.

Davison died last year at the age of 73 but his determination to beat the system and land a gamble ensures his name lives on in racing folklore.