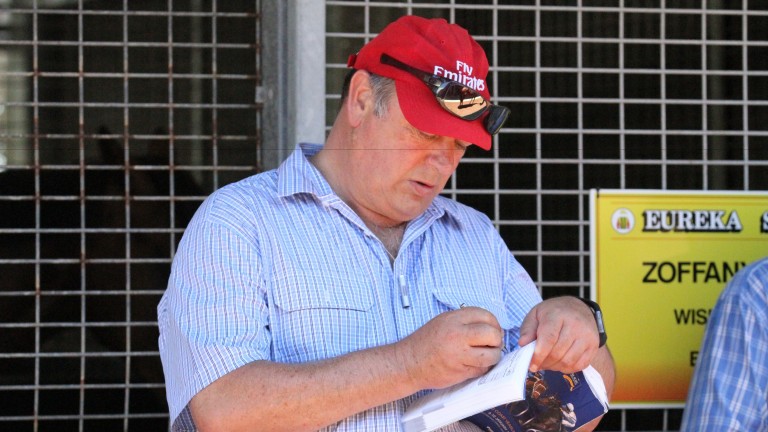 Mike Moroney won his 50th Group 1 race as a trainer at Caulfield on Saturday about a minute after thinking his chances were lost.

When the field had settled down in the C.F. Orr Stakes, Moroney looked at his three-year-old Alabama Express caught out wide without cover against some of the best horses in the land and thought another Group 1 had eluded him.

Give him that minute and Moroney was being mobbed by part-owners of the horse after he shot clear on straightening and then held on bravely to beat Fierce Impact and Kings Will Dream to become the first three-year-old winner of the race since All Too Hard in 2013.

Moroney, the winning trainer of Brew in the Melbourne Cup 20 years ago, said he will always remember Group 1 win number 50.

"To get it with a horse like that and in a race like this is great," he said of Alabama Express, who was having his seventh career start.

"He had the toughest run in the race and still won.

"You never lose the urge or the want for the Group 1 races. They are special races. When I was younger they seemed a bit easier but they are all hard earned."

Moroney said he had earmarked the Orr as being a chance for Alabama Express to join the Group 1 winners' club.

"We thought we'd bring him back and this race was his Group 1 chance. The horse has come back better and stronger and really become professional now.

"When I saw he couldn't get in, I thought it was game over, but it just shows you how good this horse is.

"His father [Redoute's Choice] won this race and he's more like dad than any other horse I've seen."

Moroney said Alabama Express' sheer speed meant he might be the perfect horse for the Group 1 Newmarket Handicap next month.

For jockey Michael Dee, the victory was his fourth at the elite level, but he shrugged off congratulations and instead pointed to the horse as being the real hero of the race.

"All credit goes to this tough bloke," he said. "He done it tough. Three-deep and no cover from a wide barrier. Gee, he's tough and he tries hard.

"I've got to thank Mike and his team and [part-owner] Rupert Legh for sticking loyal with me."

Dee said he will never get sick of the buzz associated with winning a Group 1: "It's just a feeling that you don't get to feel that often and I am glad I've been able to feel that a few times now."

After the race, trainer Matthew Smith was bemoaning the tempo of the Orr but not the performance of his runner-up Fierce Impact, who only got going late and failed narrowly to catch the three-year-old.

"He just needs that quick tempo through the whole race. He was great through the line," Smith said.

The $2.80 favourite Scales Of Justice wound up in sixth spot after being the victim of late interference when Alabama Express charged to the leaders.

Trainer Lindsey Smith said his horse found trouble but was no match for the winner.

"I was a little disappointed he came off the bridle sooner than I had hoped but the winner deserved the win," Smith said.

"He give me the short back and sides but he sat three-deep and he was too good."

Smith said he was keen to see the sectionals to see if the pace was too hot early.

"Maybe they did roll along a little quicker than we thought but we'll see how he pulls up. It [interference] may have cost him running third."