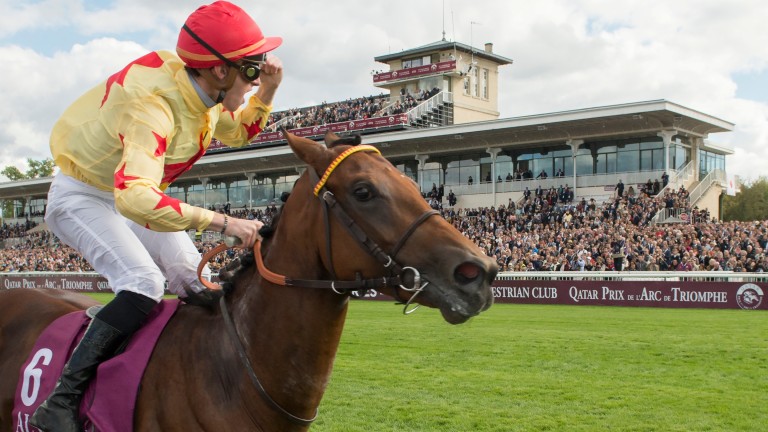 A match between Criquette Head-Maarek and Andre Fabre in a race that can often be a key trial for the 2,000 Guineas could be a script from any of the last 30 years or more.

And while no Classics will be won over the straight seven furlongs here, supporters of both National Defense and Al Wukair will hope for plenty of encouragement from a Prix Djebel (2.20) to be run for once on good ground and which may not be quite as tactical as is often the case, given the presence of Oriental as a pacemaker for African Ride.

Head-Maarek has said she may be tempted by the Poule d'Essai des Poulains (French 2,000 Guineas) rather than making the journey to Newmarket with National Defense. But a dominant performance in the mould of his four-and-a-half-length success in last October's Prix Jean-Luc Lagardere might persuade both trainer and owner Danielle Cheng to look again at the Qipco-backed 2,000 Guineas.

"He's strengthened up since last year and I'm very happy with him," said Head-Maarek. "He's been working for quite a while and did his last piece last week. I think it looks a good race."

Fabre has indicated that the Guineas is under serious consideration for Al Wukair, who could not have been more impressive in disposing of Gold Luck - who won a Group 3 at Chantilly yesterday - in the Listed Prix Isonomy at Deauville last October.

"Andre has said this is a case of getting him back onto the track and giving him more experience," said owner Al Shaqab Racing's representative Rupert Pritchard-Gordon.

"It would be great if he could win but this is a trial. There's been talk about the 2,000 Guineas and if he were to run well there's a strong chance he'd line up.

"We’re pleased to see the nice weather for him too, because he's got gears and hopefully the better ground will suit him."

Fabre has a fascinating second string in Ajmal, who appeared to throw away a winning chance in the Group 3 Prix Thomas Bryon when veering across the track but clearly has plenty of ability.

Double Lady is the only Qipco 1,000 Guineas entry among eight set to line up for the Prix Imprudence (2.55) and a good showing could earn her a return to Newmarket, the scene of her fifth-placed effort when favourite for a slowly-run Oh So Sharp Stakes in which it paid to race close to the pace.

There are two British-trained runners among the ten that contest the Listed Prix Jacques Laffitte (3.25), with the Charlie Appleby-trained Bravo Zolo race-fit from two starts at Meydan.

David Menuisier sends the progressive Saunter back to France, the four-year-old having found Lily Passion too good in a Listed race on his latest start in November.

"I think he's pretty straight and my horses appear to be in good form," said Menuisier.

"I thought he was slightly unlucky when he got trapped wide at Croise Laroche before finishing well. Ideally he's a mile-and-a-quarter horse, so this trip on a straight track should be in his favour, and I don't think they'll let the ground get too quick because of the Classic trials."

FIRST PUBLISHED 6:00PM, APR 9 2017
There has been talk about the 2,000 Guineas and if he were to run well there is a strong chance he would line up