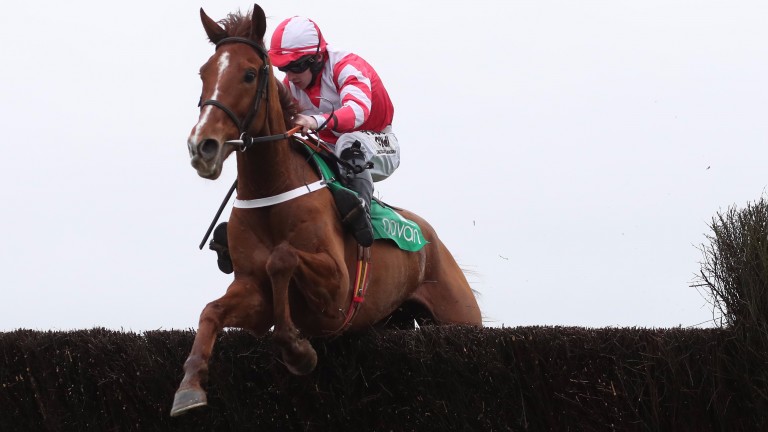 Acapella Bourgeois: one of the leading players in the 2021 Goffs Thyestes Chase
Patrick McCann (racingpost.com/photos)
1 of 1
By Mark Boylan UPDATED 7:34PM, JAN 26 2021

Total Recall provided a dream result for a local syndicate of siblings in last year's Goffs Thyestes Chase, and the same owners are aiming to repeat the feat in Thursday's €100,000 highlight when high-class 11-year-old Acapella Bourgeois bids to improve on his sixth-place finish in 2020.

The talented topweight, who ever so briefly gave Al Boum Photo a scare in the Grade 3 Savills New Year's Day Chase at Tramore last time, is the choice of Paul Townend from a five-strong squad entered by Willie Mullins as the champion trainer bids for a record-extending ninth win in the race.

Total Recall's victory 12 months ago gave the Slaneyville Syndicate an unforgettable success, but it did not come with what appeared their most obvious candidate. Acapella Bourgeois was sent off 6-1 but his performance was marred by jumping errors in testing conditions, while Total Recall came up trumps at 16-1 under Danny Mullins. 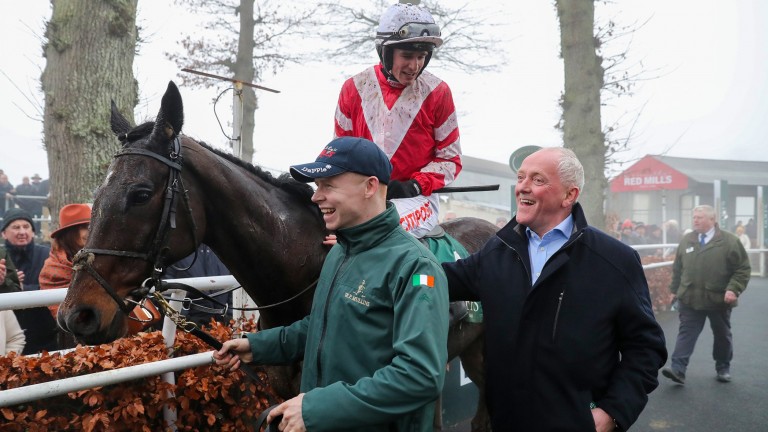 Lar Byrne (right) on Total Recall's Goffs Thyestes Chase triumph: "He was a brilliant sub - he came out of the fog and won it very decisively"
Caroline Norris (racingpost.com/photos)

"Total Recall was a brilliant sub – he came out of the fog and won it very decisively," said Lar Byrne, one of eight siblings involved in the syndicate. "It's our local track and it's a race that really means a lot to people around this neck of the woods."

He added of the family's chances of plundering the prize for a second year in succession: "Acapella is carrying top weight in heavy conditions so has it all to do, but if he produces anything like he showed at Tramore on New Year's Day he should be right there at the business end.

"I know he was beaten 19 lengths, but he was a good second to Al Boum Photo on the day. The way he jumped in the Thyestes last year was totally out of character because you'd view jumping as his forte.

"He missed a few fences that day and you have to scratch your head as to why – was it the fog? When he won on his next start in the Bobbyjo Chase at Fairyhouse he put in an exhibition of jumping." 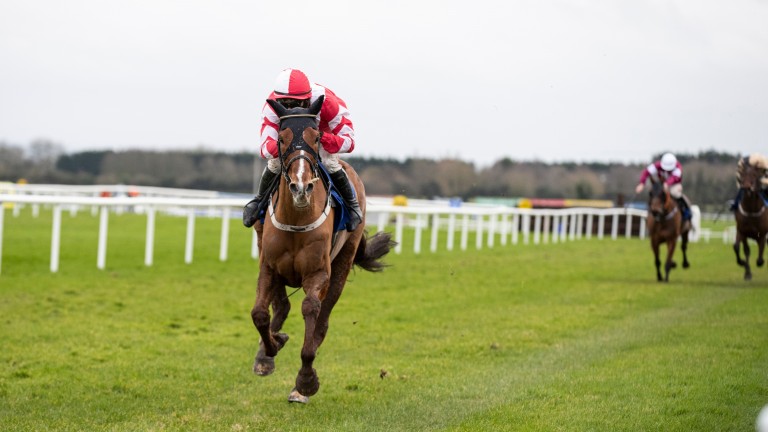 Acapella Bourgeois: impressive when winning the Grade 3 Bobbyjo Chase by 15 lengths on his final start of 2020
Patrick McCann (racingpost.com/photos)

Acapella Bourgeois shares favouritism at 7-1 alongside the Henry de Bromhead-trained Spyglass Hill with bet365, while fellow Mullins-trained contender Brahma Bull and Coko Beach, trained by Gordon Elliott, are next in the market at 8-1.

Byrne added: "It'll very much depend on the result, but we might do a family Zoom call on Thursday evening. Unfortunately we can't get together to watch it, but I'll be tuning in from my own home like the rest of them – you'll hear me shouting if he's in the shake-up."

Mullins and Elliott could have as many as 11 runners in the Thyestes – Elliott's Aforementioned is one of three reserves – and the Closutton trainer is responsible for four of the ten runners declared for the Grade 2 John Mulhern Galmoy Hurdle earlier on the card, spearheaded by Cesarewitch winner Great White Shark.

The Limerick trainer's training licence was suspended for six months after a hearing of the IHRB referrals committee, but his decision to appeal against the ruling means he can continue to have runners while the process is ongoing.

FIRST PUBLISHED 6:30PM, JAN 26 2021
If he produces anything like he showed at Tramore on New Year's Day then he should be right there at the business end