Worth the wait for patient Varian as Ajman Princess strikes 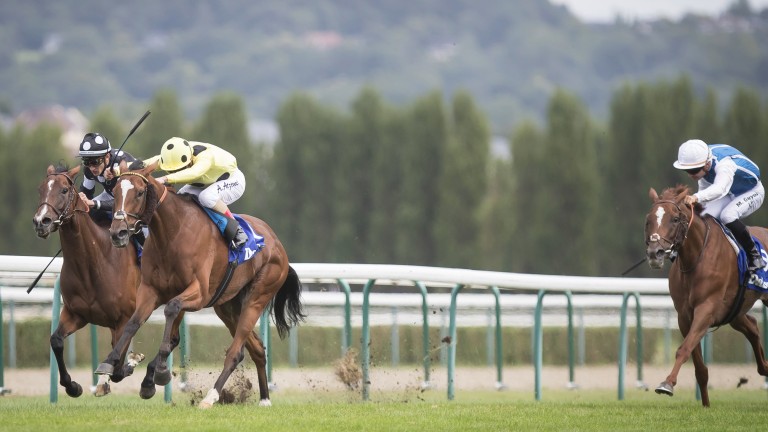 A change of approach and of ground conditions paved the way for Ajman Princess to score an all-the-way success under Andrea Atzeni, reviving memories of his first Group 1 success for trainer Roger Varian.

The Deauville stewards held an inquiry that lasted in excess of 15 minutes before confirming the victory, with the order behind her of Siyoushake, Left Hand and the Sir Michael Stoute-trained Smart Call remaining unaltered.

"We had to wait on a stewards’ inquiry on our first Group 1 in the Prix de l’Opera a few years ago so I’m used to it," said a relieved Varian.

"I have to thank [owner] Sheikh Obaid, who was very keen to change tactics with her. We’ve been riding her off the pace over a mile and a half and she has been caught flat-footed when they have turned on the taps. So we came back in trip and let her roll.

"Andrea gave her a great ride and she's a big, strong filly who strode all the way to the line. We’re very happy."

Having previously never won above Listed level, Ajman Princess was given quotes ranging between 14-1 and 20-1 for the Qipco British Champion Fillies and Mares Stakes at Ascot in October, one of two options on her future agenda.

"The ground dried in our favour and she was a bit unlucky in that two of her last three runs were on heavy ground, which might explain the improvement," continued Varian.

"We’ll enjoy today because she's a Group 1 winner now and if she does nothing else in her career it’s not the end of the world.

"She’s in races like the Opera and the Fillies and Mares on Champions Day. She’ll have that sort of programme to the end of the season and is a fabulous broodmare prospect."

Siyoushake ran a brave race in defeat on what was her first try at beyond a mile in a race that came just three weeks after her narrow defeat in the Prix Rothschild.

"For a minute I thought she could do it but she just faded a touch at the end," said trainer Freddy Head.

"She was probably paying for her recent efforts at the line, but she ran a remarkable race and I'm extremely happy with the run."

Favourite So Mi Dar was unable to pick up in the straight and could only plug on for fifth.

Smart Call has to be marked down as unlucky not to have finished much closer, having received a hefty bump on the turn from Left Hand before running on well under Jim Crowley to be beaten two short heads for second.

"The horse on my inside switched out sharply and that just give her a bump and that was that really," said Crowley.

"She's improving with every run and might even benefit for a step up in trip next time."

FIRST PUBLISHED 2:58PM, AUG 20 2017
She’s in races like the Opera and the Fillies and Mare on Champions Day