Robin Gibson pokes the GoingStick into the digital racetrack 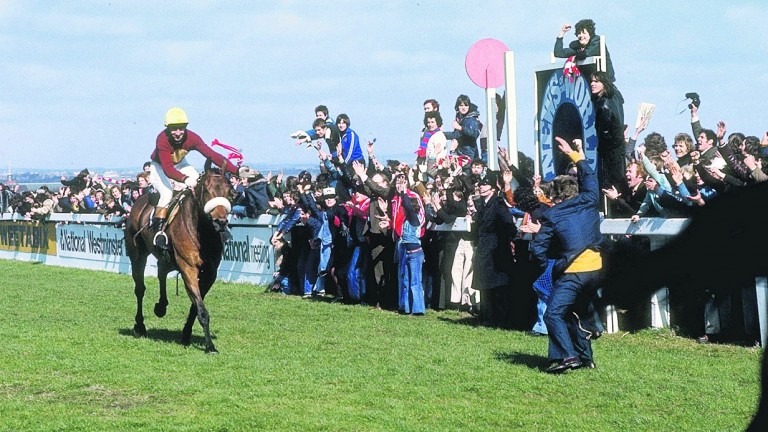 Red Rum lands his third Grand National. A feature marking the 40th anniversary of the horse's remarkable achievement can be found on Aintree's website
Getty Images
1 of 1
6:00PM, APR 1 2017

It's that strange bit – twilight with highlights. The 'real' Flat season, for those who like it green, has started to fizz weakly. The Lincoln plopped in to get things going, like an Andrews – not that tasty, you know, but it will make things better, eventually.

Did you know Andrews don't have a website, or Twitter? Does anyone even take them nowadays? Bit pre-superhighway, your restorative salts. And if Elon Musk's going to connect computers to our brains (after he perfects the Teslas, and gets into space), mild stomach upsets will surely no longer be much of a thing.

Meantime the jumps season roars back on Thursday at Aintree, like a tired partygoer handed a doorstep refill just as they were leaving.

It's tempting to say racecourse websites have got boring. But they're not really. Or the racing's not. It's the other stuff that's boring – the corporate brochure stuff. The Aintree site (a Jockey Club production), proves it and the homepage says it all.

It's a brilliant mix of influences: Soviet realism and the work of Thomas Kinkade, godly 'painter of light'. A triumphant, steely Grand National-winning jockey, aboard muscular steed, raises his fist in victory. Both stare imperiously into the half-distance, surrounded by a cheering, saluting crowd, beneath a gleaming stand, a cloud of ticket confetti and a flapping union flag, the tableau drenched in sunlight.

Touch of the Big Brothers, but it couldn't look much more exciting. And glory trickles down, as in the context even upcoming appearances by Kaiser Chiefs and Jess Glynne sound mildly unslumberous. It's only when you get to 'Conference and Events' and 'Golf Centre' that tedium sets in.

But on the official subsite, the awesome graphic is gone, replaced by a sliding carousel – backsliding, really, into meaningless slogans, an internet malady we'll never shake. 'Electric Moments', 'Glamour & Racing', 'Passion & Excitement', 'Rail & Travel Info' . . . can you take much more? It sounds like you're getting dressed up for a death ride on Old Sparky.

And it goes even further on over the top. "No other event on earth will provide the passion and excitement of the Randox Health Grand National Festival." No other, you get me? So that's why Elon Musk is so keen on space.

There are many good features, though, with a nice piece on 'Red Rum 40' marking the 40th anniversary of the great horse's third National. The Red Rum Garden will be "completely themed around Aintree’s hero", which is good, if not unexpected, news.

But there's more. Astonishingly, the Southport Sands 4D Experience will allow you to travel back in time to the 70s! Someone should tell Elon Musk. You'll encounter the decade's sights (grainy, sort of sepia, if I recall), sounds (Bay City Rollers probably) and smells (fags and dog turds on the beach).

Seriously, there's an opportunity here to demo the experience, but there are just a few pics (nice pics, mind you). Surf & Turf readers, a stylish bunch, will be glad to know there's a style award on Friday, with a first prize of a Range Rover Evoque.

Assorted gladrags and hair dye are the easy bit. You'll have to get your picture taken (fair enough, and you get a free pic), enter by logging in to the free Aintree WiFi, then keep your eye out for the announcement of the finalists on big screens – then (if you're a finalist), make yourself known to staff, and do an interview. Couldn't they just get someone to go round and have a look? Still, it's interactive. That's the main thing.

The 'Course tour' tab looks promising, but it's not interactive. Not on the site. You' ll have to get in a buggy on the day. But there's an excellent video of the fences being built, which blows new life into cliches about putting things in perspective. Here it is.

There's also a recruitment area for racemakers (£9 per hour, plus free tickets for future meetings), but you might be cutting it fine.

Overall there's plenty to explore. Aintree/JCR have stepped up their efforts. There's a good facts and figures section, but you might wish for a proper, detailed history of the race – if there's one that demands it, it is the National. Epsom featured an excellent Derby history a few years ago.

One other thing. Why not host the ITV Racing ad, voiced by a remarkably (Randox) healthy-sounding John Cooper Clarke (might be known to less young readers)? Here it is.

In the pub last Saturday after the Irn-Bru Cup final (Scottish 'football'), there was enthusiasm for cashout on some accas. All right, I was with St Mirren fans, so perhaps that's just down to a fatalism locked in by years of boredom and disappointment, but the suggestion that percentages might not be entirely favourable compared to the original bet met with scant interest.

Now some firms are offering auto-cashout, bet editing, each-way edge and other innovations to further enhance your fun, or cloud the picture, or just make you grimly question your original judgment (depending on your state of mind).

Seems like an appropriate time to examine these 'take back control' features, so if you have strong views or good ideas on the matter, please get in touch. Email or Twitter.

What they say: "Up to date, WINNING accumulator bets for ACCA fanatics."

What punters say: "Top betting experience" (jackjack1110); "Chatting with friends is awesome" (Jack701838); "All of a sudden the app says can't log in with saved credentials" (BobTheKnob69). Caveat: it's possible not all reviews are impartial.

What's good: Easy to play. Let others do the legwork: big-hitting acca compilers (bulls) climb the chart, bellowing, and their track record is clear. Socialise if you like. Put up your own accas and see if desperados clamber aboard. Be gently amused by outlandish combos. Other sports available, no racing.

What's bad: Easy to get sucked into a load of accas, especially when they're tagged 'Safe return'. All the cartoon avatars are white blokes. Bit awkward. Certainly doesn't chime with their chatroom come-on, "Follow games with your brothers".

FIRST PUBLISHED 6:00PM, APR 1 2017
Astonishingly, the Southport Sands 4D Experience will allow you to travel back in time to the 70s