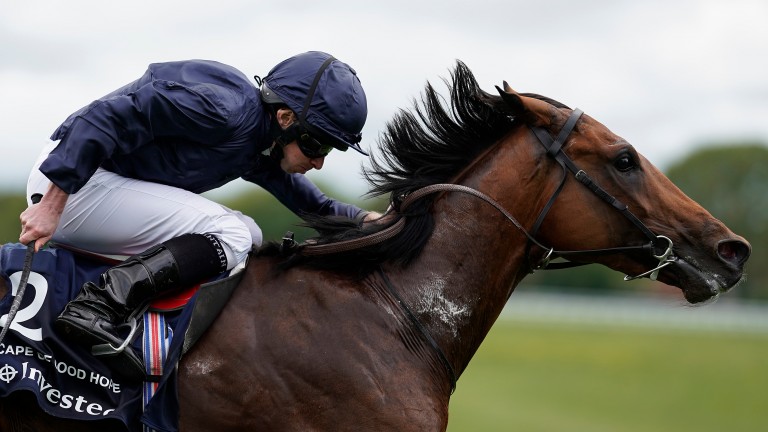 Cape Of Good Hope: one of two runners in the Belmont Derby for Aidan O'Brien
Alan Crowhurst/Getty Images
1 of 1
By Tony O'Hehir UPDATED 2:21PM, JUL 6 2019

In recent weeks Aidan O’Brien has bagged a seventh Epsom Derby, a 13th Irish Derby and in between been leading trainer at Royal Ascot for the tenth time.

O’Brien has won both of the 1m2f Belmont events, taking the Derby with Deauville in 2016 and the Oaks with Athena a year ago, and he is two-handed in both races with Cape Of Good Hope and Blenheim Palace going in the Derby and Just Wonderful and Coral Beach contesting the fillies' race.

O’Brien said: “Cape Of Good Hope wasn’t suited by the soft ground at Ascot last time. Apart from that run he has been very consistent and the flat track on fast ground should suit him well.

“Blenheim Palace was a good second in the International Stakes at the Curragh last weekend. He can be lazy so we’re putting blinkers back on.”

The O’Brien fillies face seven rivals including the Chad Brown-trained Newspaperofrecord, winner of the Breeders' Cup Juvenile Fillies Turf at Churchill Downs in November, and her stablemates Cafe Americano and Cambier Parc. The last-named beat Newspaperofrecord into second place over the course last month.

O’Brien said: “Just Wonderful seems in good form. She will be trying this distance for the first time and we think it might suit her. Coral Beach ran well in the Sandringham at Ascot. She too is stepping up in distance so we’ll have to see how she gets on.”