Cork: new seven-furlong sprint track has been given the green light
Alain Barr
1 of 1
By David Jennings UPDATED 7:29PM, APR 23 2019

Aidan O’Brien has given the new seven-furlong straight track at Cork the thumbs-up, describing the €500,000 development as really exciting, while his son Donnacha was also full of praise for the new strip having taken part in a trial on Tuesday.

The new course, which will be known as the Matchbook Straight Seven, has been given the green light to be used at Cork’s next meeting on May 10.

Groundworks began in 2017 to extend the existing six-furlong sprint track at Cork, making it one of only two straight seven-furlong facilities in the country. The development was funded through the Horse Racing Ireland (HRI) racetrack improvement scheme as part of the overall Capital Development Scheme.

“It’s something really exciting,” said the champion trainer. “We never had a seven-furlong track like this in Ireland before, it’s a flat, fast seven furlongs, horses don’t miss a beat down there – the ground is beautiful and I think it’s really exciting." 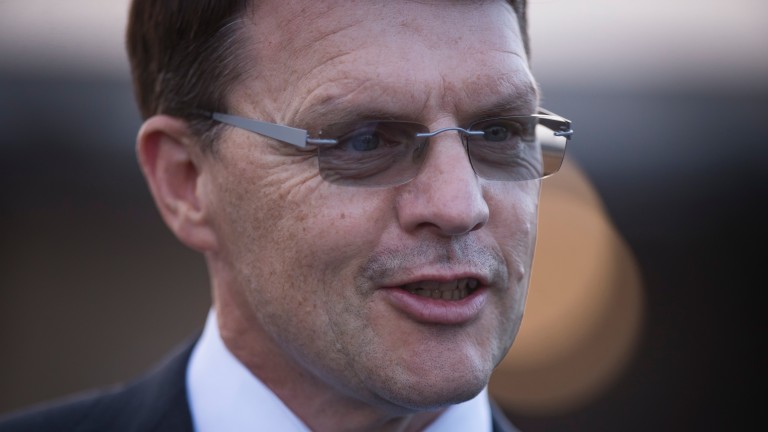 O’Brien added: “It’s different class. This is a great track. It dries out really well, the ground gets lovely and quick. We’re just very lucky to have it, a stand and facilities like this, stable yard, parade ring. It’s great for us to have it in this part of the country.”

He said: “It rode lovely, very very fair – not a single bump in it. Both horses I rode moved very well.

“I was delighted with it, it’s a great facility and I think it’ll be a big bonus to Irish racing.

“A lot of tracks abroad have straight sevens, so it’s a bonus to be able to have one here.”

Chris Hayes was another jockey who was an admirer, saying: “I thought it was beautifully presented, the soil has bedded in, it’s a lovely fair track.

“There are no ridges or undulations, just a real wide, level, proper galloping track and I’m looking forward to racing on it."

FIRST PUBLISHED 6:14PM, APR 23 2019
It?s something really exciting. We never had a seven-furlong track like this in Ireland before