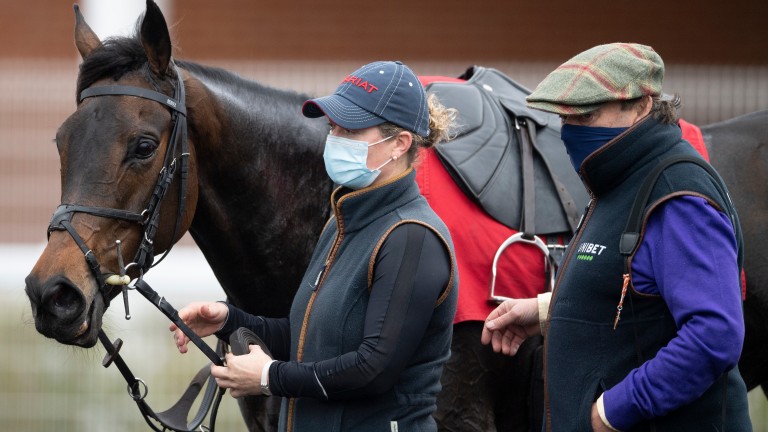 Epatante with Sophie Candy and trainer Nicky Henderson after her gallop at Newbury
Edward Whitaker / racingpost.com/photos
1 of 1
By James Burn UPDATED 10:51AM, NOV 18 2020

Aidan Coleman, the rider of top staying hurdler Paisley Park, is set to be the envy of many of his weighing room colleagues after being unveiled as the new partner of Champion Hurdle heroine Epatante, who is due to reappear at Newcastle in the Betfair Fighting Fifth Hurdle next week.

Barry Geraghty won the Champion Hurdle on the slick six-year-old in the spring, but he retired in the summer and has not, as such, been replaced as JP McManus's retained rider.

However, Coleman, who won at Newbury on Epatante 12 months ago, is set to come in for the spin on last season's top two-mile hurdler, whose trainer Nicky Henderson suggested could yet improve further in an ominous declaration for her rivals.

Coleman was not able to ride Epatante when she galloped alongside her stablemate Altior at Newbury on Tuesday morning due to BHA coronavirus protocols, so Jerry McGrath was at the controls.

"Aidan was due to be here, but we were told yesterday morning jockeys couldn't ride at a race meeting and here," Henderson said.

"JP has got a lot of horses and Aidan is going to be riding a few of them. There's no particular retained jockey in Britain. He won the Gerry Feilden on her last year and the plan was to ride her here before going to Fakenham." 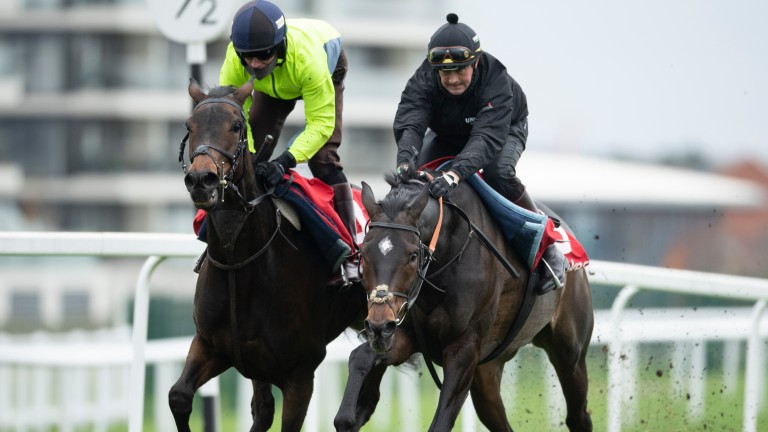 Epatante is a best-priced 7-2 to give Henderson a ninth Champion Hurdle and he added: "Her gears are very quick to work. It was JP's call last season to go from the Gerry Feilden to the Christmas Hurdle, which I thought was ambitious, but it proved deadly correct.

"We never had any intention of running her anywhere else in between Kempton and Cheltenham and I'd think it'd be the same sort of plan after the Fighting Fifth."

The winner of seven of her nine starts improved 25lb last term and, asked if there was further progress lurking, the Lambourn trainer said: "Why not? She's only young and has come a long way. The previous season when she was a novice I was thinking she was nearly our nap for the Cheltenham Festival in the mares' novice hurdle and she didn't run very well.

"She's working very well at the moment and has done that very well this morning. She'll do one more bit of work before we go on our travels up north."

Coleman said of the decision: "It's great to be reunited with her. I rode her last season in a Listed race at Newbury. She was impressive and went on to bigger and better things. Barry [Geraghty] was elsewhere so I was very fortunate to get a chance on her. I've had plenty of opportunities lately and it's an exciting couple of days with Paisley Park too."

Henderson also offered a positive update on Buveur D'Air, McManus's Champion Hurdle king in 2017 and 2018 who suffered a horror hoof injury in the Fighting Fifth a year ago.

"He's in very, very good form," he continued. "I can't tell you where he's going to go, but he's doing a lot of work and is going very well. Hopefully, he'll meet Epatante in March.

"I say he's a long way off, but he's doing a lot of work and went a mile and a quarter up the grass this morning. He's still cantering and hasn't started fast work yet, but, touch wood, everything is going according to plan.

"He wouldn't get ready for the Christmas Hurdle on Boxing Day and, at the beginning of the season, we'd have just settled for the Contenders Hurdle at Sandown and then Cheltenham, but we seem miles ahead of that schedule, so it'll be finding somewhere to go, which might not be easy. We'll see, but he seems in tremendous form."

Buveur D'Air, whose recovery is being overseen by pupil assistant Hannah Ryan, is a general 20-1 for a historic third Champion Hurdle, which the stable could have a dark horse in Middleham Park Racing's Marie's Rock, who worked with Floressa at Newbury and will start on the Epatante path at the course next week.

"She's on target for the Gerry Feilden," Henderson said.

"It's interesting to think Epatante came here for that last year rated 137 and Marie's Rock is 141, so, technically, she's a better mare at this moment than Epatante was deemed to be.

"I wouldn't read too much into that, but I think she's a good mare and she was unbeaten last season before having a problem just before Cheltenham and the mares' novice hurdle, which we fancied her quite a lot for. I think she's very smart and she had a good gallop this morning."

Read more on Nicky Henderson's squad in his stable tour:

FIRST PUBLISHED 6:30PM, NOV 17 2020
She's working very well at the moment and has done that very well this morning

Nicky Henderson: racing can't say no to the money from a five-day festival 'Legend' Hooper bags five-timer with a game display at his favourite track Key turf figures from past and present turn out to say goodbye to Barney Curley