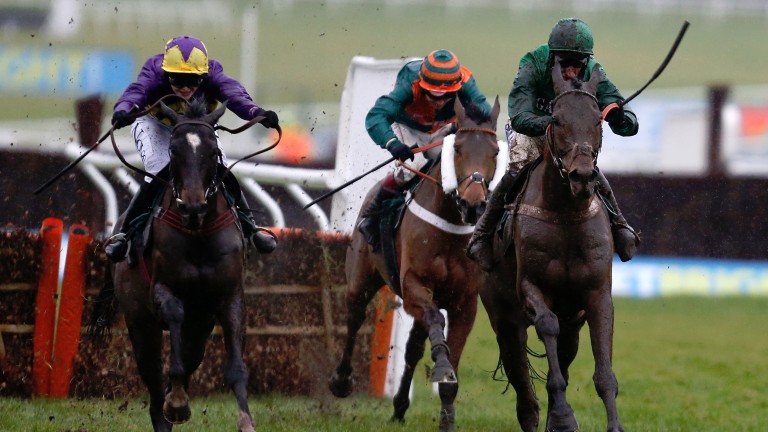 The overwhelming clamour to see the back of 2016 was felt not just by the wider public but Lizzie Kelly, for whom one day of the new year became already better than the most of the last.

Last season Kelly became the first woman to ride a Grade 1 jumps winner in Britain, but, much to her frustration, she had not made the same impact so far this season. Until that is a Cheltenham New Year's Day double, of which the highlight was a Grade 2 triumph on Agrapart in the Dornan Engineering Relkeel Hurdle.

Kelly, a 5lb conditional, was unable to claim on either Agrapart or Coo Star Sivola, winner of the opening Listed Neptune Investment Management Novices' Hurdle, but edged the duel with Daryl Jacob on L'Ami Serge by a head for the Relkeel on the horse she had won last year's Betfair Hurdle.

Kelly, 23, had not ridden a winner since November but welcomed in the new year just as she did three years ago with a Cheltenham victory on January 1.

"I was pleased to see the back of last year," she admitted. "It has been quite a difficult season up until now. A lot of the horses have been running well without quite hitting the target.

"I think it has been really tough for the people who work for us. They put in a lot of work. I'm trying my best but it's difficult to watch race after race and get no real result."

Kelly, one of no fewer than five professional female jockeys to ride winners over jumps in Britain on the day – a rare feat – added: "At the beginning of the season I set myself a target of 15 wins, but I'm nowhere near that. Today's been brilliant though, and 2017 is already looking like a good year. Fingers crossed it continues."

Agrapart won the Betfair over two miles, but this exercise over an extended two and a half miles was to see if he had the potential to stretch out to three for the Sun Bets Stayers' Hurdle, for which he can be backed at between 20-1 and 33-1.

"The reason for coming here was to see if he could step up," said trainer Nick Williams, Kelly's stepfather. "It's all come right today. All his wins have been on heavy so he's ground-dependent.

"I don't know whether we go for the Stayers', but he probably will. We're not going to go back in trip. Lizzie is good and amazingly underrated."

L'Ami Serge was delivered through horses and looked the likely winner once hitting the front after jumping the last.

"He ran like the best horse throughout the race and then didn't win," said trainer Nicky Henderson.

"I'm tempted to stay over hurdles. He travelled a bit like a two-miler, not like a stayer. We won't be going any further."

FIRST PUBLISHED 3:31PM, JAN 1 2017
It has been quite a difficult season up till now. A lot of the horses have been running well without quite hitting the target