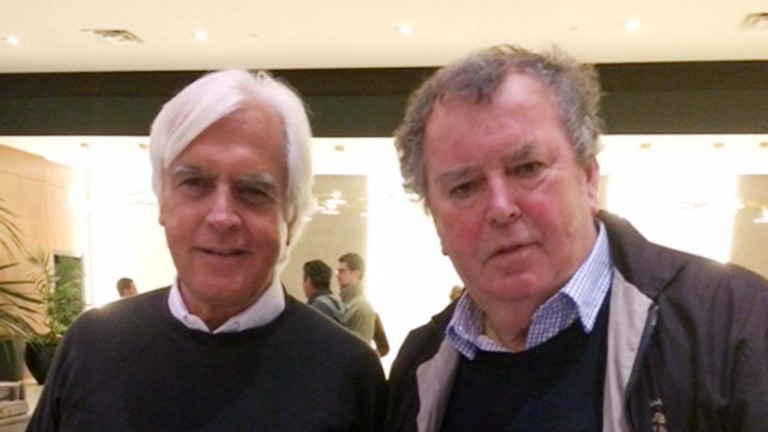 Mike Ridgeway (right, pictured with Bob Baffert) was one of the 13 unlucky Scoop6 punters narrowly denied in the final leg
1 of 1
By Tom Ward UPDATED 7:21PM, JAN 21 2019

Amid the celebrations triggered by Saturday's trio of Scoop6 £643,903.40 successes, spare a thought for those unlucky punters denied by the narrowest of margins.

Thirteen ticket holders had pinned their final-leg hopes on the Sue Smith-trained Silva Eclipse, who looked to be en route to victory after jumping the last flight clear in the Old Boston Handicap Hurdle at Haydock – only to go down by a nose after being clawed back in the final stages by Closing Ceremony.

Mike Ridgeway, 70, whose £32 bet would have yielded £148,593.09 had Silva Eclipse held on, spoke on Monday about being one of the unlucky 13 to suffer the agonising defeat.

The native of Ilkley, West Yorkshire said that the excitement of five correct selections had driven him to go down to his local betting shop where he took in the final leg with friends.

He said: "When he got over the last I just shouted, 'We're there, we're there' and then I thought it was a dead heat."

"A few drinks were required afterwards but more in sorrow than anger really. I've done the Scoop6 for donkey's years and I've had a few occasions where I've been knocking on the door but I've never come as close as this one.

"I'm actually quite philosophical about these things. I've been punting on horses for a long time. I take the good and the not-so-good in equal measure really.

"You can study form for hours but at the end of the day, if the luck's not with you you're not going to win," Ridgeway added.

Sue Smith: trainer of Silva Eclipse, who was runner-up in the final leg of the Scoop6
Martin Lynch (racingpost.com/photos)

The loss elicited a familiar feeling for Ridgeway, who was once denied a Tote Jackpot win when one of his selections was disqualified.

The three Scoop6 winners will now have the opportunity to claim the £1,030,922 bonus if they select the winner of a nominated race this Saturday.