Kennedy's friend Outlander claims another Grade 1 as Our Duke disappoints

In what will hopefully be a long and illustrious career, Jack Kennedy will always have a special place in his affections for Outlander, as the horse that gave him his first Grade 1 win in the 2016 Lexus Chase added another with a gutsy success in the JNwine.com Champion Chase.

Outlander has two ways of running and could not have been given a prayer based on his performance in the Grade 3 Daily Star Chase won by Road To Respect at Punchestown last month. But this could not have been more different as the Gordon Elliott-trained gelding turned the tables spectacularly on Noel Meade's charge to ensure a 1-2 for Gigginstown House Stud.

"He was really back to himself today after being very disappointing at Punchestown – I know that was his first run of the season but he never jumped a fence or anything," said Kennedy.

"Emily McMahon had him out hunting last week and she did a great job with him, and the first-time cheekpieces seemed to do the trick too.

"He never missed a beat the whole way, he jumped and travelled great. He really dug deep too.

"We were spread across the track and if he was a bit closer to the other horse he might even have gone a few lengths clear. He's one of my favourite horses and he's one I'll never forget."

It was a race that was expected to mark the beginning of the road to Cheltenham for last season's top novice chaser and Irish Grand National winner Our Duke, but he was flat from start to finish. 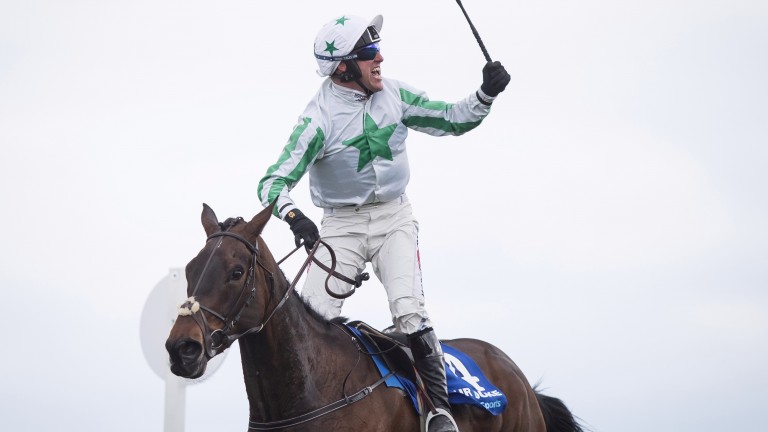 Our Duke: scoped badly after an abysmal performance at Down Royal
Patrick McCann

He was struggling from the off and from early on in the final circuit he was starting to lose touch. He finished a well-beaten last of seven and it was clear that something was badly amiss.

"I couldn't hold my position going to the first fence, it was very lacklustre and not him at all," said rider Robbie Power.

On post-race examination he scoped badly, so the reason for his effort was quickly diagnosed.

"We'll put him on antibiotics and take it from there," said trainer Jessica Harrington.

There may have been some surprise that, of the two Noel Meade possibles for this race, Road To Respect turned up here and Disko went for the Grade 2, but Road To Respect fully justified the decision to run as he went down by only half a length, and if keeping straight might well have won.

Meade said: "He did everything bar win. In the end his tendency to come left did cost him as Sean Flanagan thought he threw away that half-length.

"We had him tucked away on the inside and it kept him straight, but then when he got out on his own all he wanted to do was come left. I don't know why he does it, though on other tracks maybe it will be a help."

He added: "We're delighted he ran so well and disappointed we got beaten, but we're proud of him. I would think he'll probably go to the Lexus over Christmas now."

Bookmaker reaction to the race was understandably muted. Our Duke was eased to a best-priced 20-1 for the Timico Cheltenham Gold Cup with Paddy Power (from 8 and 10), while Outlander is 33-1 with Sky Bet for the same race. Road To Respect remained a 25-1 shot with several firms.