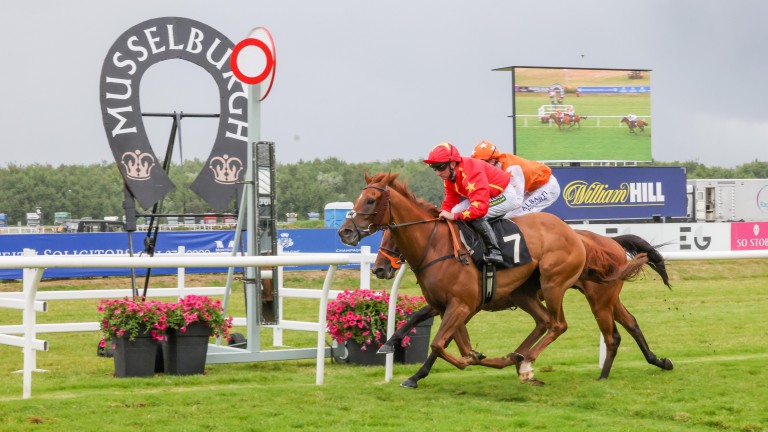 North-east trainer Adam Nicol believes he could have a Northumberland Plate horse on his hands after watching stable star Wise Eagle continue his remarkable year by winning the 1m6f Portobello Cup under Paul Hanagan.

The four-year-old cost just 7,000gns from a horses-in-training sale in October and has now won six times from ten runs in 2021 for former jump jockey Nicol, who took out a dual-purpose licence last year.

“I never thought he would achieve what he’s achieved since we got him," said Nicol. "He finished second over hurdles in December, which was fantastic, then he won a jumpers’ bumper and I thought that was job done. We don’t set the bar too high for him and we make sure he’s right every time he runs.

“I think if we get him in the 90s, a right good gallop in the Northumberland Plate might suit.”

Wise Eagle benefits from being trained on the local beaches near Nicol's base in Seahouses, Northumberland, and the trainer added on Racing TV: “He loves the sea at Bamburgh beach. He gets chased by a few dogs and it keeps him on his toes.”

Surprise Dash winner Mokaatil struck for the first time since his Derby day victory at Epsom when getting up late to score by a short head under Ben Curtis in a photo-finish to the 5f handicap.

Callum Rodriguez won the 7f handicap on Gometra Ginty but was also hit with a six-day careless riding ban, to be served from August 20-25, after allowing his mount Edward Cornelius to drift left towards the rail without sufficient correction in the 5f conditions stakes.

FIRST PUBLISHED 6:26PM, AUG 6 2021
He loves the sea at Bamburgh beach. He gets chased by a few dogs and it keeps him on his toes