Action stations on the Limekilns as Dewhurst hopes abound 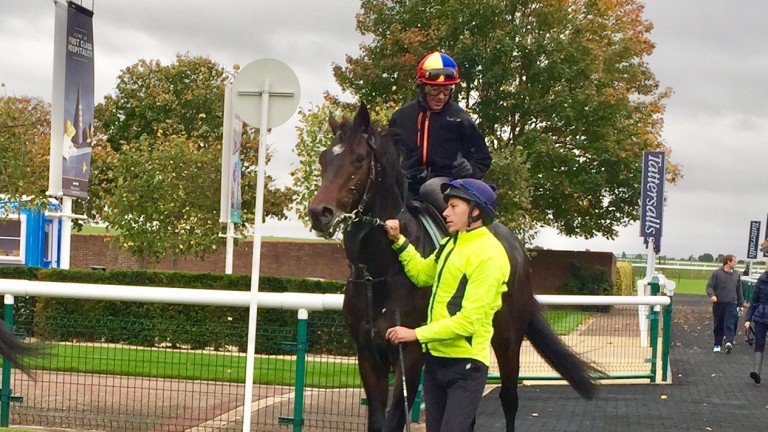 Hey Gaman and Frankie Dettori after working on the Rowley Mile on Saturday morning
1 of 1
By David Milnes 1:58PM, OCT 7 2017

Emaraaty John Gosden
The impressive Newbury maiden winner worked on the Limekilns long gallop almost exactly at the same time as his rival Dewhurst contender Expert Eye stepped on to the trial ground. Jim Crowley made a rare appearance among the Clarehaven ranks to send the 2.6 million guineas purchase clear of an older stablemate and the pair look sure to be in the mix next Saturday.

Nezwaah Roger Varian
The filly may not have stayed when fourth to Enable in the Yorkshire Oaks last time and is set to drop back in trip in next Sunday's Grade 1 EP Taylor Stakes at Woodbine, in which she finished seventh to Al's Gal a year ago. As usual, John Lowe was at the controls of the daughter of Dubawi up the trial ground and she looked as good as ever.

Hey Gaman James Tate
Tate booked the Rowley Mile after breakfast to give Frankie Dettori his first feel of the Group 2 Champagne Stakes runner-up, who holds an entry in the Dewhurst Stakes. Dettori reported the son of New Approach found the ground quick enough and connections are possibly eyeing the Group 1 Racing Post Trophy on October 28 instead.

Ship Of The Fen Martyn Meade

Local builder and owner-breeder Colin Murfitt put his topiary skills to good effect around the viewing tower on the Al Bahathri before his youngster cut down his lead horse in a seven-furlong exercise. The juvenile is named after Ely Cathedral, which on a clear day can be viewed from the neighbouring Limekilns training grounds.

Orsera Peter Chapple-Hyam
The daughter of Clodovil showed there was no fluke about her 20-1 debut success at Leicester last month when impressing on the long gallop on Friday. Chapple-Hyam is aiming to get some black type for his youngster in the Listed Radley Stakes at Newbury on October 28.

Sound and Silence Charlie Appleby
Before his comeback ride at Ascot in the afternoon, William Buick enjoyed a loosener when sending this speedy youngster past two companions on the short gallop. The son of Exceed And Excel won a Group 3 at Maisons-Laffitte last month and is booked to go back to France for a Group 2 at the same venue on Friday.

FIRST PUBLISHED 1:58PM, OCT 7 2017
Jim Crowley made a rare appearance among the Clarehaven ranks to send the 2.6 million guineas purchase clear of an older stablemate